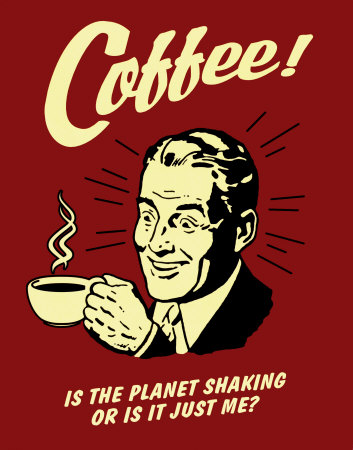 GIMME COFFEE!!! Anni doan wan none of that hipster crap served to me by some teenage barista with a nosering and blue hair. I want raw unleaded coffee that's going to stain the inside of my mouth instead of this frothy nonsense with some fake Italian-sounding name! I want that firehose blast of caffeine to kick start my butt and resuscitate of my blood sugar level long enough till I can stuff a stale Albertson's doughnut down my gullet. COFFEE WILL HELP US SURVIVE! (Just ask the 49ers this morning.)

AHHHHHH!!! Now I can enjoy the Monday Morning Required Reading...

Daniel Moore wasn't available: The new Federal courthouse in Tuscaloosa expected to be completed in 2011 will feature a series of giant murals depicting the city's history including the Crimson Tide football. Artist Caleb O'Conner's studio in Toumey Hall on the UA campus will be open to the public while he completes the project.

All you have to do is win, right?: Les Miles finds himself on the hot seat after a disappointing 4-0 start to the season.

Pour a 40 for a fallen homie: Stellar Alabama blog Eight in the Box is with us no more.

"The only thing better than than playing for a national title in New Orleans on Jan. 1 is being in Tuscaloosa on Jan. 2 to celebrate winning it." Alabama's 1979 National Championship Team held their 30th reunion in Tuscaloosa over the weekend and were honored at halftime of the Arkansas game. The team topped Lou Holt's Hogs in the 1980 Sugar Bowl to remain undefeated but won the championship when Ohio State fell to Southern California in the Rose Bowl.

While we are out here at midfield: Also honored during the Arkansas game was linebacker Woodrow Lowe who set the Tide's all-time record for tackles in a single season with 134 stops in 1973.

A Sea of Blue looks on the bright side: "Alabama is scary. Just not as scary as Florida."

Rocky Top Talk Hail Mary Haiku: You are Jonathan Crompton facing the Auburn Tigers. You're behind by four at midfield. Only one second remains on the clock, and you have to heave the Hail Mary. Now, describe what happens in Haiku form. DO IT!

Please explain why the coach benched him for his entire senior season: It turns out that Keith Dunnavant's next book will be about the life of Alabama great and Pro Football Hall-of-Famer, Bart Starr. The author will speak to Montgomery Quarterback Club's meeting Tuesday night.