Running Back Success Rates vs. Arkansas

Share All sharing options for: Running Back Success Rates vs. Arkansas

Sweet mercy. Be prepared to read some dismal numbers everybody. The numbers against Virginia Tech (which I still need to post) weren't great, but these are abysmal. I know everyone knew the running game didn't go well against the Razorbacks, but seeing it in spreadsheets makes it look even worse than the ugly truth we already knew about. As always, running backs are listed in order of their first carry: 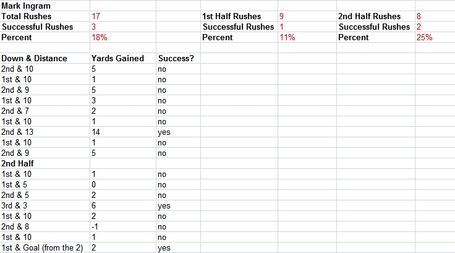 Nothing really special about Ingram's day outside of the two TDs (one of which was a reception.) Only one carry over 10 yards and another four at five yards or greater (though only one of those was a success due to the down and distance when they were made.) Needless to say, they were shutting the run down quite nicely.

As OTS noted in this post, Richardson's 52 yard TD run should've been a loss. His success on that carry was due to an incredible amount of piss poor tackling (I believe four guys had a legit shot at him) and hard running on Richardson's part. Take that carry away and his numbers are just as bad as everyone else's. The 7.2 YPC for Richardson against Arkansas is the exact reason for this kind of analytical breakdown. That run was an outlier that massively skewed the overall performance numbers.

We ended the day with a 23% success rate as a team. Thank goodness the passing game was able to light it up.