Share All sharing options for: Running Back Success Rates Against Virginia Tech

I've finally gotten around to crunching the numbers on RB success rates against Virginia Tech. Needless to say, their defense is a wee bit more stout than that of Florida International and North Texas and the numbers bear that out. Our guys put up extremely gaudy numbers against those overmatched defenses, but didn't manage nearly as well against Arkansas as you saw yesterday. The number against VT are somewhere in between. I'm going to run down the RBs in the order they received their first carry, but will group the receiver handoffs in one group at the end rather than create entirely different spreadsheets for a single carry.

Here's a quick reminder about what it takes for a carry to be deemed successful: 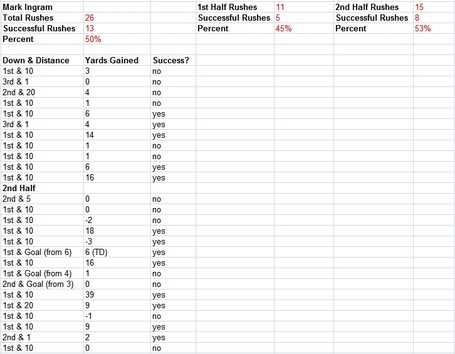 One stunning thing I discovered processing the numbers was, that by this metric, the team didn't have a single successful rush in the first quarter out of seven carries. Though we managed nine points in the quarter, it wasn't because of our ground game. Our designed run plays earned us a whole nine yards one seven plays. At the end of the first quarter, McElroy was our leading rusher by a mile. We got lucky with short fields for scoring drives of 26 and 30 yards and the fact that Tiffin was on in the first quarter.

I didn't check to see how many times we threw on first down, but good grief, we ran it a lot on first down. 20 of Ingram's 26 carries came on first down (including a 1st & 20.) His running seemed rather boom or bust against VT as he had seven carries of 9 yards or more, but 13 carries of 2 yards or less. That's 22 out of 26 of his carries leaving only four carries ranging from 3 to 8 yards.

Grant only had two carries for 2 yards against VT. His size combined with VTs defensive skill obviously meant he wasn't going to get a lot of carries and he didn't. A sample size of two carries isn't a lot to go on, but his carries did come in the zero percent RB success rate first quarter.

Upchurch's running against VT was also in the "boom or bust" category. Three runs of 19 yards or greater and a TD with his other four carries coming in at 2 yards or less. I'm not really sure how a fumbled rush fits in statistically, but in terms of gaining necessary yardage, it was a success, so we're just going to mark it down that way for now. Obviously protecting the ball is of paramount importance, so you could just as well argue that it's a failed rushing attempt. At 33 yards, it basically equalled a good punt to pin VT inside their own 10.

Just a handful of carries in killing off the clock. A good time to get his first carries at the collegiate level.

Rushing stats for receivers aren't provided by SBN's widget generator, so there's only a spreadsheet for this one. We did two designed plays against VT featuring receivers carrying the ball. Both plays resulted in a loss of one yard. For me though, it was nice to see us not being so vanilla on offense. There was a successful receiver carry against FIU and with the wildcat, we're mixing it up more than we have in a long time and so far, it's been fun to watch.

The overall success rate for the team was 40%, which is way better than it was against Arkansas.