Editor's Note: This is the fourth installment in a four-piece series that will give an in-depth preview of the individual unit match-ups, as well as a special teams preview, and finally ending on Friday with a final wrap-up before the two teams face off on Saturday night. 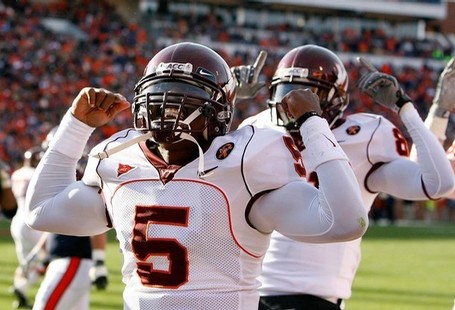 Now that we've taken an in-depth look at all three phases of the game in previewing the season opener against Virginia Tech, let's close things out by taking one final look at the game.

First and foremost, I feel it should be noted that this is not Clemson. Period. I think the overwhelming majority of Alabama fans understand that, but it's a point that should be reiterated just in case. Clemson was a 7-6 team a year ago that got their head coach fired, and for all their pre-season hype, they were a weak team at the line of scrimmage that we mowed over without them really giving much of a fight. Again, this Virginia Tech team is not Clemson, period. The Hokies are a better team from top-to-bottom, they love playing physical football, and Frank Beamer and company could coach circles around Tommy Bowden. And finally, if nothing else, rest assured this Virginia Tech won't roll over and play dead like Clemson did a year ago. If nothing else, I can guarantee you that this team will fight 'til they drop. That lunch pail you will see over on the Hokie sideline is a bit of a gimmick, to be sure, but there is a lot of truth to be found in what it represents.

Furthermore, don't underestimate the value of good coaching, and to that end don't underestimate Frank Beamer. He will likely never get the credit he truly deserves because he, probably, will never win a national championship, never coach a traditional powerhouse program, or never coach in a big media market. Nevertheless, what Beamer has done in his 20+ years at Virginia Tech is nothing short of amazing, and truth be told he's clearly one of the greatest college football coaches of his generation. Sure he wins ugly, but the goal of the game is to win and the aesthetic value of exactly how you achieve that end result is wholly meaningless. The only even somewhat negative thing I can think about Beamer is that I hate that our own fanbase was so adamant in 1996 that Mike Dubose be hired that it ended any legitimate chance we had of pursuing Beamer, but of course that is no actual criticism of Beamer himself.

Those two points established, however, I do find that the Hokies are still a difficult team to gauge. They generally play ugly football, but they still win a lot of games (10+ wins each year since 2004). Of course, though, playing in the ACC they rarely face an elite team -- truth be told, the ACC hasn't turned out an elite team since Florida State way back in 2000 -- and many of their bigger non-conference match-ups have not gone well. LSU annihilated them two years ago in Baton Rouge, a year that was capped off by a loss to Kansas in the Orange Bowl. They did have a big lead in the 2006 Peach Bowl against Georgia, but choked late and ultimately lost to a pretty mediocre Georgia team 31-24. A couple of years prior to that, in 2004, they lost to both USC and Auburn at neutral sites. The biggest win they have had lately, of course, came last year against Cincinnati in the Orange Bowl, but even that win is of suspect quality. The Bearcats earned a berth in the Orange Bowl thanks to winning the Big East -- though that had as much to do with the post-Petrino collapse of Louisville and the post-Rodriguez collapse of West Virginia than anything that the Bearcats themselves did -- but there is a legitimate question now as to whether or not the Big East even deserves a guaranteed BCS bid, and in any event Cincinnati's resume in 2008 is marred by blowout losses to Oklahoma and UConn, plus a squeaker win over Akron. Again, that's the biggest win, but even it's of suspect quality. And moreover, the Hokies weren't a flawless team even a year ago, as their resume is dotted with losses to East Carolina and Miami.

On the other hand, the sheer number of wins that the Hokies have been able to post for years on end cannot be underestimated, and for all of the SEC chest thumping, the ACC isn't as bad as many would like to make it out to be. No they never have any elite teams, but they do always produce their share of fairly good, quality teams, and consistently beating those team in the manner that the Hokies have certainly must count for something. Moreover, their can be no real questioning that the Hokies have been the premiere team of the ACC since it's expansion in 2004. Just look at the Hokies results the past five years:

2005: Went 11-2, won the Coastal Division, and lost in the ACC Championship Game 27-22 to FSU (who the Hokies were favored to beat by two touchdowns)

2006: "Down" year, winning only 10 games, finishing a close second in the Coastal Division, and playing in the Peach Bowl

As impressive as that five year run has been, the truth remains that the Hokies will probably make it a three-peat in the ACC in 2009. The overall schedule is very tough -- non-conference games against Alabama, Nebraska, and East Carolina -- but the conference slate looks very promising. They don't draw Florida State, Clemson, or Wake Forest from the Atlantic Division, and if they can just split games against Georgia Tech and North Carolina, they will probably end up in the ACC Championship Game for the fifth time in six years. Regardless of what happens in Atlanta, the odds are that the Hokies are playing in yet another BCS game come the first week of January.

And likewise, on the other side of the Dome, I'm not really sure what to make of Alabama either. Our defense should be very good, but predicting the offense is a crapshoot. I cannot even say for certain what we are going to try to do, and even if you can do that there is still a great deal of uncertainty regarding performance. We have a new quarterback and a newly revamped offensive line, and if those two units struggle we're going to have some serious problems on offense. Sure the defense will still keep us in games, but bad offenses commonly ruin the efforts of very good defenses, and that could happen this year with the Tide as well. I know we would all like to assume that we are finally back to national powerhouse status year after year (and hopefully that is the case), but that is no guarantee. As much as I hate to admit it, seeing the Tide have a pretty middling year in 2009, while a bit unlikely, could not legitimately be classified as a major surprise. It happened to Saban in year three in Baton Rouge -- which started with them getting dominated by Virginia Tech in the season opener, ironically enough -- and it could very well happen in year three in Tuscaloosa.

And Greg McElroy is a concern, no two ways about it. I particular am haunted with memories of Brandon Cox' debut in 2005 against Georgia Tech. If you recall, Cox had a great year in 2005, and aside from the Tech game he completed almost 62% of his passes, averaged over eight yards per attempt, had a four-to-one touchdown-to-interception ratio, and posted a gaudy passer rating of 144.4. Of course, though, in that debut against Tech, he completely only half of his passes, threw four picks, and took three big sacks, all of which combined for the Tigers to lose a game they should have otherwise won. And again, Cox had a great year in 2005, but the debut was just terrible, and that's a major concern here with McElroy. Even if he is a good quarterback and goes on to have a good year, you never know exactly how the first time out will go, especially against this caliber of defense. McElroy could be a good quarterback and have a good year in 2009, and still really struggle Saturday night in Atlanta. 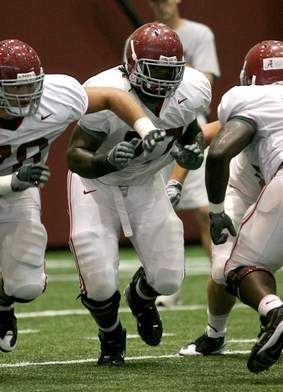 In real terms, combined, I think what it all means is that it is going to be very difficult to accurately predict the outcome of this game -- and no I do not think the late news regarding Jerrell Harris' uncertainty, Ryan Williams being named the Hokies starting tailback, and Beamer suspending fullback Kenny Jefferson really does anything to change that either. I think it's most likely a toss-up that could legitimately go either way. Not too surprisingly, if you look at some of the "expert" predictions on this game, they are split, and it should be pointed out that the boys in Vegas, while having 'Bama favored, have the spread under a touchdown. Again, from the outset, it has the looks of a toss-up game with it being difficult to get a good read on either team.

At the end of the day though, for all the depth of the previews that we have had here on RBR, ultimately I think this game comes down to the performance of the Alabama offensive line. The 'Bama defense will contain their offense well enough, and if our offensive line can effectively establish a running game, we can get enough out of the offense to get the job done and emerge with the victory. On the other hand, if we experience any of the struggles and lapses like we did last year against Tulane or Utah, the Hokies front seven is absolutely good enough to eat our lunch, and we'll be in their fight of our lives trying to get the win. Bottom line, if James Carpenter, Mike Johnson, William Vlachos, Barrett Jones, and Drew Davis can control the line of scrimmage, you can effectively go ahead and fire up Rammer Jammer. If not...