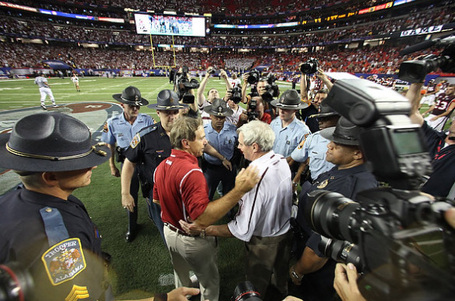 The victory over Virginia Tech on Saturday marked the 800th win in the 117-year history of the Alabama football program. Alabama is once again among the seven schools to cross the 800-win threshold.

Alabama reached the 800-win mark in 2006 but the outcome of that contest and 23 others between 2005 and 2007 were vacated due to a ruling by the NCAA that is currently under appeal. (Incorrect, see this post) The Crimson Tide all-time record now stands at  800-316-43, a .709 winning percentage which is the sixth best in FBS history.

The list of the six schools ahead of Alabama on the all-time win list is after the jump: