Though now largely lost in the flurry of points over the final twelve minutes, the Alabama v. Virginia Tech game had actually turned into quite a defensive stalemate. After Rolando McClain's meltdown allowed Virginia Tech to take a 17-16 lead into halftime, things turned very quiet in the following stanza. The four full possessions in the third quarter all resulted in punts, and the only promising drive by either side ended in Roy Upchurch's fumble on the long run. Alabama had a big opportunity early in the fourth quarter, but a big drop on a long pass to the usually reliable Julio Jones on 3rd and 1 led to another punt. P.J. Fitzerald launched a very good, 44-yard punt that ended in a fair catch, and the Tide defense held strong, allowing only 11 yards on five plays. Brett Bowden got of a relatively short punt (39 yards), that was made even worse for the Hokies by a solid 14-yard return by Javier Arenas.

And that is the background to which Alabama inherited the ball at the Crimson Tide 46 with only 12:51 remaining in the game. Given the way the game had flowed in the recent quarter, it was a legitimate possibility that the Tide may only have two more cracks at getting the job done on offense, so it is quickly becoming a now-or-never situation. Alabama offensive coordinator Jim McElwain is faced with a variety of options, but instead of just trying to pick up a couple of first downs to move into field goal range, McElwain goes on the aggressive.

Let's take a closer look at the pre-snap alignments. Click here for a full-size version of the pre-snap diagram. 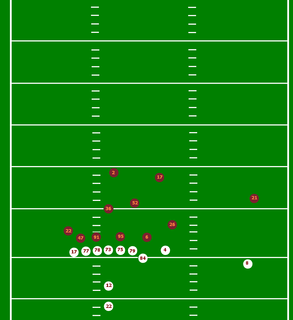 Though we end up with a very aggressive play-call, it's hard to tell from how we break the huddle. We line up in the Pistol with two tight ends and Mark Ingram in the backfield. We only have two wide receivers in the game, and one of those receivers, Marquis Maze (4), is lined up in the slot less than five yards from the tight end Colin Peek (84). Julio Jones (8) is split far to the wide right.

Virginia Tech responds in relatively vanilla fashion. The Hokies are a 4-3 team and here they come out in the 4-3 with their typical starting eleven on the field. Virginia Tech cornerback Stephan Virgil (22) moves in almost on the line of scrimmage to the left because we don't have a receiver on that side. Interestingly enough, though, the Hokies do largely give away their cover scheme with their pre-snap formation. By not moving Virgil over to the opposite side of the field to match Alabama's two wide receivers with two Hokie cornerbacks, Virginia Tech effectively lets it be known that they are playing a zone on this particular play. 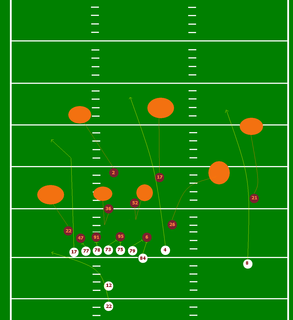 Let's start by taking a look up front at the offensive line because that is where it all begins with this play. Any long pass is going to require good blocking up front to allow the route to properly develop, thus pass protection takes on the utmost of importance. The Hokies only come with a four-man rush, and that allows us to take advantage of the numbers game. Colin Peek (84) stays in to block, and he assists right tackle Drew Davis (79). Together, those two players neutralize Virginia Tech's best pass rusher, Jason Worils (6), with no real threat. Likewise, right guard Barrett Jones (75) and center William Vlachos combine to neutralize the Hokies left defensive tackle Cordarrow Thompson (95). That's easy enough, though, the sheer numbers give us the advantage there, but the real linchpin to this whole thing is how the left side of the line does in left guard Mike Johnson (78) and left tackle James Carpenter (77). They get no help, and are forced to block right defensive tackle John Graves (91) and right defensive end Nekos Brown (47). In particular, it's a tough assignment for Carpenter simply because he outweighs Brown by a good 70 pounds, but nevertheless those two each got their jobs done well, and that allows McElroy the time he needs to throw the football.

With time to throw the football, McElroy can now go to work. Cornerback Rashad Carmichael (21) is lined up over Julio Jones, but the Hokies bracketed Julio Jones all night long with coverage high and low, and that is the case here as well. Carmichael plays well off Jones, thus making the intermediate-to-deep passes difficult, and linebacker Cody Grimm (26) quickly retreats from his outside linebacker spot into pass coverage towards Jones to ensure that all of the short-to-intermediate throws are contested. As a result, Jones is effectively eliminated from the play.

But there's a price to be paid with spending so much of your scarce resources to stop one player, and that is exactly what the Tide is looking to take advantage of here. We had some success running the football on our previous drive, so Jim McElwain calls for a playaction pass out of the Pistol. That sucks up both of the linebackers lined up inside, Jake Johnson (36) and Barquell Rivers (52), who have to move forward to respect with the run with the Tide possessing a very good tailback and possibly as many as seven run blockers. It's a fake, though, and while both players move quickly back into zone coverage, both are effectively eliminated from the play.

Likewise, to the left of the formation, our best pure receiving threat from the tight end position, Brad Smelley (17), fires off the line of the scrimmage and runs a corner route to a good intermediate depth. Smelley's athleticism and good hands forces both cornerback Stephan Virgin (22) and rover Davon Morgan (2) to shade to the left side of the field to help stop Smelley.

And with rover Davon Morgan having to move to the left side of the field to help with Smelley, that gives us exactly what we want, one-on-one coverage with Marquis Maze against Kam Chancellor (17). The Hokies are running a zone in the back seven, but Chancellor has responsibility for the deep middle, and when Maze goes streaking on a vertical route, Chancellor is forced to try to stop Maze all by himself. And that's exactly what we want. Chancellor is a good player in his own right, but at 6'4 and nearly 225 pounds, his specialty is clearly stopping the run and his pass coverage skills are quite limited. At the very least, the last type of player that Chancellor is best at defending is a small speedster like Maze.

With McElroy having the time to throw, the burner Maze predictably blows by the bigger Chancellor, and with a beautiful pass it's first and goal 'Bama at the Hokie six yard line. A play later, Mark Ingram goes in for the go-ahead touchdown, and McElroy adds the two-point conversion with a pass to Colin Peek in the back of the end zone. 24-17, 'Bama.