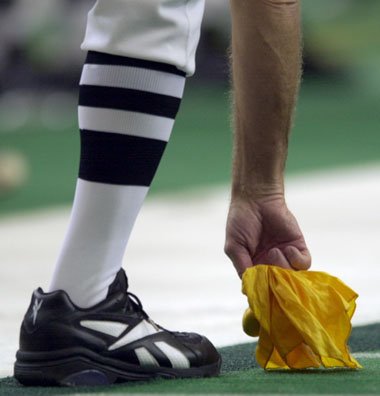 After being one of the least penalized teams in the country in 2008, Alabama began the 2009 season with an uncharacteristically high 10 penalties for 89 yards in the season opener against Virginia Tech. With that in mind, let's take a closer look at all of the penalties incurred and see if we can learn something moving forward. Let's start with listing all of the penalties themselves, with the specific foul and player who committed it in bold:

And those were the ten penalties that Matt Austin's crew nailed the Tide for, so what can we learn from them?

First and foremost, we can see that many of the penalties didn't actually come back to harm the Tide. We overcame both of James Carpenter's holding penalties, plus the false start penalty on Barrett Jones. Likewise, the late-minute delay of game was a completely meaningless penalty that merely padded the stat line in a negative way. On the other hand, though, many of the penalties hurt us badly. The Hokies' late touchdown in the second quarter was almost entirely the result of four penalties on the Tide, and had Mike Johnson's false start penalty been averted, it's entirely possible (and perhaps likely) that we start with a run on 1st and 10 and stay out of the obvious passing situation that resulted in the McElroy interception. Perhaps not surprisingly, some of penalties hurt bad, some turned out to be harmless.

Now, moving forward, a few of the penalties are probably of little concern. The delay of game penalty, again, was meaningless in the first place, and as disturbing as Rolando McClain's meltdown was (and costly, too) it's highly unlikely that he (or anyone else on defense for that matter) does that again in the near future. Likewise, Marquis Johnson's pass interference penalty was a bit of a questionable call, and one that -- while a very slight technical violation of the rule -- was probably more the result of a trigger-happy referee than anything else. Moving forward, it's probably of little concern.

On the other hand, the penalties on the offensive line and on special teams are a major concern, and I'm afraid to say penalties that we may struggle with again moving forward. The offensive line committed four penalties -- and the two holding penalties on Carpenter do not include Drew Davis' tackle of Jason Worilds on a third and long that the Tide ultimately turned into a touchdown; a no-call that this Alabama fan readily admits that he has no clue how the referees missed  -- and those penalties were the result of their struggles. Bottom line, they were committing penalties because they were having trouble handling the Hokies for much of the night, and if we struggle with an opposing front seven again, I'm afraid the penalties are going to return. We were really fortunate to largely overcome those penalties against the Hokies, not to mention the luck on the non-call on Davis, but there's no guarantee that we will be that lucky moving forward.

Likewise, moving forward, the special teams penalties are a concern. We had breakdowns in kick coverage all night long, and both Tyrone King's horse collar penalty and Chris Jordan's late hit penalty were the direct result of those players trying in desperation to avoid another long run-back for a touchdown by the Virginia Tech kick returner. Again, if you struggle severely in kick coverage, you are going to commit those type of penalties out of sheer desperation alone.

All in all, things weren't necessarily as bad as the raw numbers might tell you. Several of the penalties were of the likely non-recurring variety that we will not likely see in large volumes in the future, but there are some legitimate concerns here. If our offensive line continues to struggle like it did for much of the game against Virginia Tech, and if the kick coverage team continues its breakdowns, we are likely to continue to see penalty flags flying at a relatively high rate.