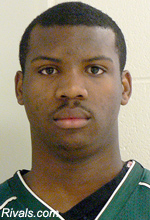 Alfy Hill has committed to play football at the University of Alabama. Hill is a native of Shallotte, North Carolina, and weighs in at approximately 6'4 and 230 pounds. Playing for West Brunswick High School, 2009 marks only the second year that Hill has played organized football. Last year as a junior, he finished with 112 tackles, 15 tackles for a loss, 12 sacks, and four blocked punts.

Hill ultimately picked the Tide over North Carolina, North Carolina State, Tennessee, Arkansas, Virginia Tech, and others. Hill was not seriously considering Alabama until at the last minute he decided to attend Alabama's first summer camp, but he was blown away by the Tide then and has remained high on them ever since. He was recruited to Alabama by Sal Sunseri, formerly of the Carolina Panthers.

Snagging Hill out of North Carolina is a major coup for the Tide. It goes without saying that in no way is North Carolina a traditional recruiting area for Alabama, and recruiting talent in the Tarheel state is not easy with Butch Davis at the helm in Chapel Hill. With Hill on board, the Tide now looks to set its sights on another elite prospect out of the state of North Carolina: Keenan Allen.