Share All sharing options for: Week Two Preview: Getting to Know Florida International 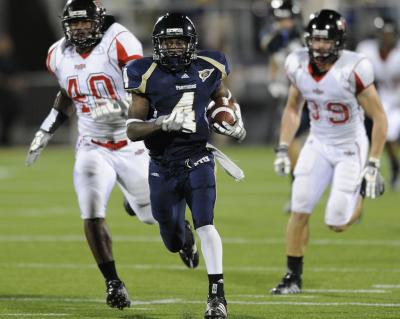 Don't worry, coach, after doing a little research I certainly respect our opponent, too.

Though I'm sure the two things most of you will think of when the words "Florida International" comes up are the infamous Miami brawl and our the 2006 game where our own beloved Tide struggled through most of the game, a lot has changed since then.  Second year head coach Mario Cristobal (a former lineman on our favorite Miami Hurricanes team) took a team that went 0-12 in 2006 to 1-11 in '07 and 5-6 in '08.  Along with the improvement in the wins column, he's also overseen improvement in almost every offensive and defensive category:

The only category in which the team regressed from '07 to '08 is rushing offense, but the increase in passing production was able to offset it enough that total offense improved as well. Two factors played a huge role in this sudden upswing in the passing game; the emergence of Paul McCall at QB and T.Y. Hilton at WR.

McCall, who led the team to it's only victory of '07 in his first start, finished last season with a reasonably impressive stat line:

Though he threw more INTs than most would like, 6 of the 9 (75%) came in the first half of the season while in the last half he cut down on the turnovers and completed more than 55% of his passes four times in the last six games (vs only twice in the first half).  His improvement was certainly aided by the emergence of true freshman T.Y. Hilton.  This Sun Belt Julio didn't have a catch in the opening loss against Kansas, but he quickly became an asset to the team, grabbing a pass of longer than 20 yards in all the remaining games and at least 30 in ten of them.  In fact, he alone was responsible for roughly 1/4 of the entire FIU offense's yards last year:

Add to that his skills as a return man (over 1000 yards in kick and punt returns combined), and you have a tremendous athlete that deserves the high praise Saban bestowed upon him earlier in the week. Making things even more interesting for McCall is the fact that his entire starting offensive line is back in front of him and the next three receiving threats return, all of whom managed their fair share of production last year as well:

Putting it all together, this is a team that is on the upswing and has some talented athletes that could make things very interesting for the Tide. At the risk of enraging our beloved Nicktator, we shouldn't have any trouble with them, but at the same time we will certainly need to play the game and execute like we are fully capable if we expect to win.