Y'all may remember this post from a little while back, but I'm posting it again with an updated press release that contains all the final details of the ball itself.

The football will feature three distinct and attractive white panels, each one full of historic and important information.  These will not be sold elsewhere, making it a "must-have" for any diehard Bama fan, something that can be displayed proudly at home, in an office or used as a fundraising gift at golf events or silent auctions.

Here’s a quick overview of the 3 white panels on the football:

Panel One will contain information about the school’s stadium history, including the date of the first game played there on Sept. 28, 1929.  In the center of this panel is the traditional school logo and to the right side of that is a listing of Bama’s championship history, including a listing of all 12 national titles, and recognition of 26 conference championships, 10 undefeated seasons and 57 bowl appearances.

Panel Two will recap the 2009 regular season, game-by-game, with opponents and final scores of each contest, along with the final score of the BCS title game, and also will be framed around another Alabama school logo.  It also has a printed inscription that reads "Perfect Season."

Panel Three is reserved for the official BCS championship game logo, and includes the venue of the January 7, 2010 game (Pasadena) along with the two opponents (Texas vs. Alabama) The final score of 37-21 is also printed there, with the words "National Champions." 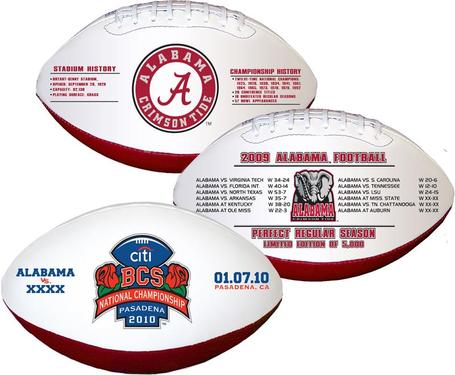 More info and ordering details are after the jump.

Only 5,000 BCS Championship Game Footballs Will Be Produced

Funds from Sales Will Benefit

Make-A-Wish Foundation® of Georgia and Alabama

Tuscaloosa, AL – The number 13 proved to be lucky for the Crimson Tide.

Alabama, which entered the national championship game on Thursday night against Texas with a 13-0 record, emerged with a 37-21 victory over Texas in Pasadena, CA and notched its 13th national title in team history.

Also, the last time and ONLY time Alabama won 13 games in a season they went on to win the national title,, defeating Miami in the January 1, 1993 Sugar Bowl game.  So much for 13 being an unlucky number!

And no one is smiling more today then some youngsters who have some life-threatening medical conditions and look to the Make-A-Wish Foundation® of Georgia and Alabama to raise monies to get wishes granted for them.  That’s because Nikco Sports announced it is working with them on a project to produce a limited edition, full-sized Alabama BCS championship game title football to help raise some funds for local youngsters.

Just 5,000 of the officially licensed footballs, complete with the official BCS Championship logo on one of the three white panels, will be produced.  Each football comes with a handsome acrylic display case and is priced at $99 each.  The football by itself is $69.95 if you don’t want the display case.  In recent years, Nikco Sports has raised more than $1.7 million for children’s charities.

Tide fans can order the footballs while the supply lasts by calling 1-800-345-2868 or visiting www.nikcosports.com.  Each football is accompanied by a numbered certificate of authenticity, suitable for framing, to enhance the value.

"Alabama certainly has posted an impressive run to an unbeaten regular season, including the big win over Florida.  And now they are the champs," noted Nikco Sports CEO Craig Bidner, whose company has continued to give back to the community since its inception in 1992.  "When you think of Bama football, which dates back to 1892, you think of their rich history, all those national titles and their consistency—the only SEC school to win a league title in each decade since the SEC began in 1933.  Very impressive.

"Impressive is another description I would use to describe the work being done by the Make-A-Wish Foundation® of Georgia and Alabama, as they help out youngsters who have some life-threatening medical conditions.  We’re honored and pleased to be a part of a project that can salute both the great football history of Alabama, and help out the youngsters at the local Make-A-Wish Foundation, especially during these challenging economic times."

About the Make-A-Wish Foundation

The Make-A-Wish Foundation® grants the wishes of children with life-threatening medical conditions to enrich the human experience with hope, strength and joy. Born in 1980 when a group of caring individuals helped a young boy fulfill his dream of becoming a police officer, the Foundation is now the largest wish-granting charity in the world, with 65 chapters in the U.S. and its territories. With the help of generous donors and nearly 25,000 volunteers, the Make-A-Wish Foundation grants more than 12,600 wishes a year and has granted more than 168,000 wishes in the U.S. since inception.