Share All sharing options for: The 2009 Moral Victory National Championship 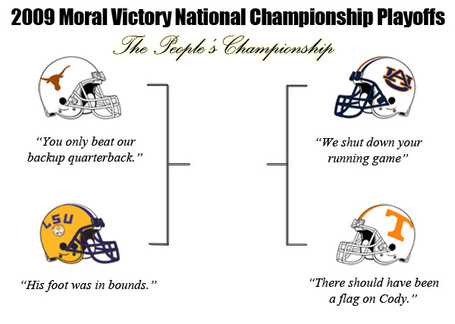 So pretty much every key victory in the Crimson Tide's undefeated run through the 2009 season was followed by an opposing fanbase crying foul and insisting that their team really deserved to win. Sadly though, victories are still awarded to the team with the most points on the scoreboard when time expires.

But we here at Roll Bama Roll are nothing if not caring. We would like to not only address this horrible state of affairs but also offer a resolution to the ongoing debate about the lack of a playoff to determine the true champion. Thus we present the 2009 Moral Victory National Championship playoff in order to determine the coveted mantle of "The People's Champion."

As you are aware, the Alabama Crimson Tide won the BCS National Championship with a victory in Pasadena, California last week. While no team was able to beat the Crimson Tide on the football field this season, no less than four teams insist they should have won their particular game. The MVNC allows these teams and their claims to victory go head to head so it can be definitively decided which one has the best moral victory of the season.