Share All sharing options for: It's Just Too Good NOT to Use...

When kleph came up with the idea for a "Moral Victory National Championship" we sent out a request via the Twitter for a special trophy to go to the winner.  Something funny happened on the way to the schadenfreude, though, when everyone got the joke and took it pretty well.  Feeling like actually going through the process of taking a vote and running the bracket to it's conclusion would be belaboring the point, we let the single post stand on it's own but forgot to e-mail the incredibly talented person who volunteered to do our photoshopping for us and save her some effort.  But since this is too awesome to just let sit in the e-mails, and because blogging has produced so much negative exposure to everyone else's fans that I've grown incredibly hateful towards every other team in the country (besides UConn, who represented very well at the papajohns.com bowl, go Huskies!), so much so that every game not involving the Tide has become a meteor game for me, I'm posting it anyway: 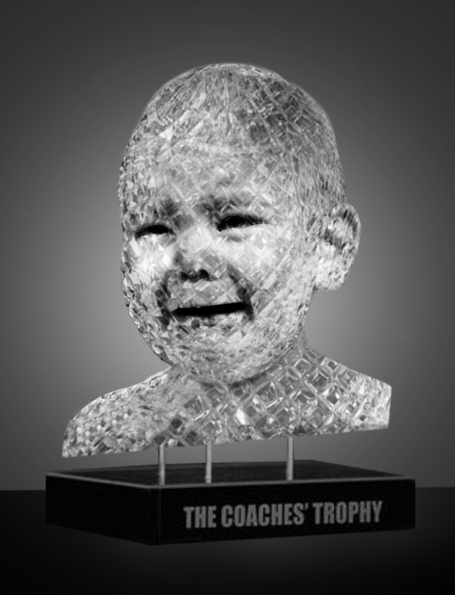 Yep, all y'all who cried about Colt McCoy have got yourselves a trophy, too, 'cause Lord knows with him Texas would have scored approximately 187 TDs based on the "shredding" of Alabama's defense on the first drive. All y'all that think Alabama is one of the worst undefeated national champions and somehow stole our real title and don't deserve it, you got yourself a trophy, too. For everyone that wanted to sneer at the trophy being displayed at Wal-Mart (despite the clear logistical sense it made, as well as precedent), here's one you can display wherever you think is fitting. And just for good measure, for every rival fan that assured us our time was done, we'd never be able to hire a good coach again, we'd never be able to pass Auburn/Tennesse/Florida/LSU in recruiting, and that our mercenary coach would jump right back to the NFL/Notre Dame/LSU/USC (oops, wrong team)/Wherever Will Pay Him More after two seasons, here's a trophy for you.  Make sure and share it with everyone that thinks we ought to be gracious about all this and lay off the taunting, too, 'cause, you know, it's not like we've had to put up with all y'alls crap for a decade or anything.  So enjoy, and us dumb cracker assholes will be down here with our trophy, happy to know we could give a little something back in these troubled times.  Roll Tide.

Update: On further reflection, the following fanbases may join UConn in escaping my scorn; Florida, Utah, Boise State, TCU, and Wisconsin.  Their allotted hate will instead go towards Ohio State.  Y'all want to make fun of us for being rednecks?  Head up there.  They are light years ahead of us in the field of White Trashery.