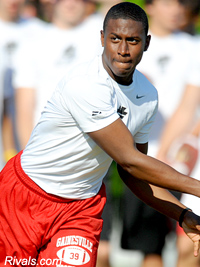 A mere nine days after de-committing from Alabama in the wake of the BCS Championship victory over Texas, Blake Sims has re-committed to the Crimson Tide.

The 6'1, 190 pound athlete out of Gainesville, Georgia plays quarterback in high school, but projects at a different position on the collegiate level. He wants to play wide receiver -- though he clearly has the athletic ability to play defensive back as well -- and while the Alabama coaching staff was going to allow him to do that, Sims became concerned over the logjam of young talent that we have at the position ('Bama signed four wide receivers last year, and looks to sign at least that many this year). Long story short, he was concerned that he would end up at defensive back at Alabama if he indeed signed with the Tide, and after an in-home visit from Lane Kiffin, Sims decided to renege on Nick Saban and company.

Nick Saban, however, didn't stop recruiting him at that point, unlike what he has done with several other highly-touted de-commitments in the past. Saban wanted him to come to Tuscaloosa for his official visit, and then discuss between the two whatever issues concerned Sims. Sims agreed to do that, and when Lane Kiffin bolted for LA the decision became an easy one. Sims re-committed to the Tide today at the close of his official visit to the Capstone after he and Saban ironed out his concerns.

Two additional points should be made with regard to Sims:

One, Sims wears the number two at Gainesville High, and has previously expressed a desire to wear that number at the next level. According to what he told various reporters after his re-commitment to Alabama, Sims confirmed that he would be allowed to wear that number next year at the Capstone. But, of course, number two at Alabama is currently sported on offense by Star Jackson. I have said in the past that I would like to see Jackson stick around at least through the Spring, but judging by this it certainly seems like his mind is already made up to transfer.

Two, Sims expects to compete for playing time next year at both the punt returner and kick returner positions. Furthermore, it does seem like our coaching staff has a role in mind for him next year, and perhaps not just as an ordinary wide receiver. Specifically, Sims said today that the coaching staff planned to use him in ways like David Palmer was used during his time at the Capstone. This is all speculation on my part, but I believe we may use Sims next year in a Wildcat role. He is a great athlete, but in all fairness he is also a pretty good passer in his own right, passing for over 5,000 yards at quarterback the past two years. I imagine you will probably see him with the ball in his hand and with a passing option in the near future at Alabama.

Either way, ultimately Sims picked the Tide over offers from the likes of Auburn, Georgia, Tennessee, Michigan, and others. He is rated a four-star recruit with both major recruiting services, and according to Sims, his recruitment is now completely over. He says he will not take any more official visits, nor will he allow any more opposing coaches into his home.