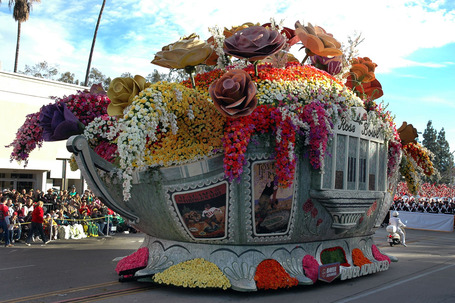 A float in the 121st Rose Parade featuring the Crimson Tide's win over Washington State in 1931 Rose Bowl won the Queen's Award for it's depicting the history of the famed football game using the particular milieu of the Tournament of Roses.

The float's theme "We Are the Champions" represented a tribute to the Rose Bowl game itself. Four "floragraphs" depicted the game programs from four ground-breaking Rose Bowl games including the Alabama's win over the Cougars that garnered the Crimson Tide's third national championship.

The float was sponsored by Bayer Advanced, a lawn and garden products manufacturer. The 32-foot tall, 55-foot long float featured 26,000 roses. The "floragraphs" were painted with a palette derived from a variety of organic sources including nori seaweed, parsley flakes and fine coconut.

The parade was held the morning of New Year's Day in downtown Pasadena and featured 41 of the distinctive, flower-decorated floats as well as 21 marching bands and 23 equestrian units.