With National Signing Day a mere eight days away, the time is drawing near for the pen to hit the paper. Alabama is destined to land its third consecutive elite recruiting class, but nevertheless we do have more than our fair share of drama as the big day draws near.

The biggest, and most unsettling, news for Alabama surrounds Keenan Allen. The longtime Alabama lean / commitment went back on the market a bit this past weekend when his older half-brother, Zack Maynard, decided to transfer away from Buffalo in search of a more prestigious program. Since then, Allen took an official visit this past weekend to Clemson with his brother, and recently canceled a visit to North Carolina State this upcoming weekend and has been rumored to cancel a visit to Cal as well. Many Clemson people are taking the approach that it is a guaranteed that Allen is a package deal with his brother, and that the cancellation of the visits effectively seal the deal that he is going to wear the purple and orange. Of course, it's not a given that they are a package deal, and that is probably a bit more wishful thinking on the part of Clemson fans than anything else. Of course, though, any Alabama fan does have to concerned about the pressure that Allen could have from his family to stay closer to home and attend school with his brother.

Clearly, schools (in particular Clemson) are using Maynard as bait to lure in his older brother. With Kyle Parker having an impressive freshman campaign for the Tigers, Maynard will never start at Clemson, but that is not to say that they cannot lure Allen in with grandiose promises to his brother. For now, it seems that Allen is generally expected to stick with the Tide, but clearly this is a very fluid situation that could change at a moment's notice. I wouldn't be overly worried right now, but by the same token, realistically, it couldn't be considered a major shock if he indeed spurned us and went somewhere else with his brother. At the very least, it's clear that other programs will offer them a package deal, which is something we won't, and that may hurt our case if Allen wants to play with his brother or if his family decides to push him to stamp the meal ticket for his brother. If I may borrow a phrase from my game previews, hope for the best is all you can say at this point.

Corey Grant also came out with some talk of possibly re-opening his commitment, though shortly thereafter he quickly shot down such rumors by denying that he would take a visit to Auburn this weekend and saying that he was firmly committed to Alabama. Hopefully Grant will indeed stick with the Tide, but it's really hard to say at this point. For one, his denials don't really mean anything -- both JuWuan James and Craig Sanders said the exact same thing hours before spurning the Tide -- and frankly it's no big deal that he may not visit Auburn this weekend because he practically lives in Auburn and attended several Auburn games this year. What we can say for certain now is that given our depth at tailback and wide receiver, Grant could have a legitimate reason for re-considering his commitment, and that Auburn would definitely take a commitment from him simply to claim a recruiting victory over the Tide. Hopefully Grant will stick to both his commitment and his recent word, but this could very well still be a fluid situation. If Grant indeed does spurn the Tide, I really do not think anyone should be overly surprised by it. The comforting fact for Alabama fans should be that, during his initial recruitment process, Grant's parents were very adamant that their son to ultimately keep his word to whatever school he initially committed to.

James Stone took an official visit this past weekend to Tennessee and came away very impressed. After long having Alabama as his leader, Stone was open about the fact that the race had narrowed significantly and now it may even be possible that the Vols have a slight lead. It was only realistic that Tennessee receive a bump after their official visit, and frankly the harsh reality is that Tennessee is a much bigger threat to us with Dooley in charge. Stone was clearly always turned off by Kiffin's antics and shenanigans, but having a good, decent man in charge with Dooley really makes them a much stronger competitor. Joe Pendry and Sal Sunseri will go for an in-home visit with Stone tomorrow night, and hopefully they can lock up his commitment to the Tide then. Realistically, though, while the smart money may still ultimately be very slightly in the Tide's favor, the work of Dooley has effectively turned Stone from a heavy Alabama lean into a toss-up. As with Grant and Allen, hope for the best.

It is largely still the same situation for Arie Kouandijo. The big fellow took an official visit this past weekend to USC, and it went about like you would expect to be the case with official visits to USC. It wouldn't necessarily be a huge shock to see Kouandijo end up somewhere else, but again the smart money is still on him signing with the Crimson Tide. The most positive sign with regard to our chances with both Stone and Kouandijo is that our staff has taken no actions consistent to what you would typically see if they were expected to sign someone else (i.e. pursuing other offensive linemen).

Now, the general consensus is that we have three scholarships left remaining in this class, so if you assume that both Stone and Kouandijo are locked in, that leaves one spot open. So who does that go to? 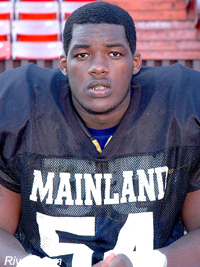 The smart money right now is one Calvin Smith, the former Tennessee commitment. The Hialeah, Florida product is a stout defensive line recruit, and he visited Tuscaloosa this past weekend on an official visit. He came away very high on the Tide, and if nothing else it is clear that his family is sold on 'Bama. At this point, Smith is scheduled to choose on National Signing Day on ESPN, likely between either Alabama or Tennessee, and for right now the smart money is perhaps slightly on the Tide. It looks like the Vols will have to make a bit of a late run if they want to bring this young man back into the fold.

Also in Tuscaloosa this weekend were defensive lineman Brandon Ivory and cornerback Dequan Menzie, and interestingly enough both walked away claiming offers to Alabama. However, with that in mind, I think we should all be relatively skeptical about the validity of their offers at this point. Ivory, for one, remains committed to Memphis even while he supposedly has a firm offer to Alabama, and realistically we all know there is no way in hell that would ever happen. Simply put, either he has a conditional offer or he has a greyshirt offer. Meanwhile, Dequan Menzie is somewhat in the same boat. He is a JUCO prospect so obviously the possibility of a greyshirt isn't present, but he came into the weekend with most expecting him to sign with Ole Miss, and walks away with that still being the general presumption. Once again, you do the math there. Again, despite their public claims, I imagine that their offers are either conditional offers or greyshirt offers at this point.

Moving forward, I imagine that our staff's preferred order of finish is to hold onto all current commitments, and then sign three more players... specifically Stone, Kouandijo, and Smith. If we can land those three, I imagine we will probably call it a day. However, if we miss on any of those three, then obviously there will be some spots opened up for guys like Ivory, Menzie, and others. At this point, once again, I imagine it's still a bit of a fluid situation. It is comforting to think that Saban and company have this thing all sealed up and pre-determined -- and that is probably true to an extent -- but common sense tells you that everything is tentative with 18-year old males, so until pen hits paper, largely anything can happen. Keep that in mind over the course of the next eight days.

Finally, I'll close with a bit of bad news for the 2011 class... after the national championship game, 2011 commitment Marvin Shinn is wavering and now looks to be pretty open. Shinn is openly concerned about Alabama's ability to throw the football and their ability to fully maximize the potential of an elite receiver (specifically with regard to Julio Jones). According to his high school coach, Shinn thought seriously of de-committing after the national championship game, and in any event it seems like he will open up his recruitment somewhat. Now, step back from the ledge... Shinn previously said it was his lifelong dream to play at Alabama, and he will almost certainly still end up sticking with the Tide come NSD 2011. Nevertheless, though, his situation does bring up a valid point... don't bash Shinn here. Bottom line, if we are run-heavy as hell and struggle to throw the football, we're going to have serious problems moving forward trying to recruit elite wide receivers. Now again I expect that Shinn will ultimately sign with the Tide and that Alabama will indeed have a potent passing attack in the years to come with A.J. McCarron and Philip Sims at the helm, but clearly that is going to be something we are going to have to affirmatively prove on the field, otherwise we will suffer the consequences of it on the recruiting trails.

Editor's Note: As has been the case the past two years, we'll have our NSD open threads going here all day on RBR. We'll keep track of all of the commitments, both Alabama and otherwise, and we hope you guys all stop by and participate again this year. We had approximately 2,000 comments on the open threads last year on NSD, and we'd certainly like to top that number this time around. And one more endorsement in case you are on the fence... last year, RBR was about the only 'Bama site on the Internet that didn't crash.