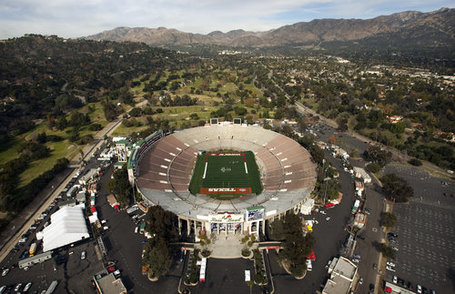 Boys and girls, it is almost here. After almost twenty years of waiting to get back on this stage, we are now down to our final two hours before kick-off. Players should begin taking the field shortly for warm-ups and the gates are open now. Just breathe.

And now the latest on Rolando McClain from Gentry Estes:

All signs have pointed toward Alabama linebacker Rolando McClain being able to play tonight after dealing with a stomach virus in recent days, That's no shock. There may not be a tougher man on the Crimson Tide's team than McClain, and I've been pretty sure all along that nothing will keep him out of this one, especially since it's expected to be his final college contest.

That said, the question isn't if he will play but how well he can play. Apparently McClain was in pretty bad shape earlier this week and was unable to hold down food. He's doing better now, but even the toughest football player needs energy and fluids to be at his best.

Chime in here with all of your thoughts and comments, and I will keep any breaking news updated on this thread.