We've said for almost two years that when 'Bama lost we'd include ourselves in the meltdown, and damned if it didn't finally happen. Not every loss results in a meltdown, and some meltdowns are tame compared to others, and with that in mind the 'Bama meltdown this week wasn't the greatest. Nevertheless, there are some gems and at the least it wouldn't be fair to not include ourselves after all of the fun we've gotten at the expense of everyone else. And to those RBR readers who made the meltdown, congratulations.

Joining us in meltdown time are Miami, Florida, and Michigan. The 'Canes were smoked by Florida State, Florida choked late to Les Miles and LSU, and Michigan lost to Michigan State for the third straight year, something that has not happened since the Lyndon Johnson administration. Obviously, as you'll see, none of them were too happy about it, and in fact the Miami meltdown could be a serious contender for greatest non-LSU meltdown ever.

You know the standard warning, the language and descriptions get bad. Very bad. You've been warned. Enjoy after the jump:

bama fans leaving the game – ARE YOU FUCKING SERIOUS? YOU SHOULD LOSE YOUR FUCKING SEASON TICKETS FOR THAT SHIT!

Vlachos throws his hands up in the air like he doesn’t know what to do. You cannot pass block ’em all fucking day.

That sequence was like one of those Gene Chizik horror stories from his days at Iowa State.

All because we shit the bed on 2nd and Savannah

THEY GOT THE GLOCK SIDEWAYS. KILL SHOT

I cannot believe we fucking blew our streak to South Carolina and Stephen fucking Garcia.

I HATE THAT WE'RE GETTING FUCKED BY COCKS

just pulled out the 357 Magnum. Anybody got a drop cloth? I just retiled my floor and would hate to get it dirty.

We honestly look like Florida '09, and that ain't a compliment.

Losing the streak to South Carolina is about like losing a billion dollar stock portfolio by putting all of your money into Vandaleigh Industries.

Losing valiantly after an epic battle is one thing, but these motherfuckers mowed us down with a cache of AK-47's the second they showed up.

Honk if you sacked McElroy?

We shoulda just saved UA money and not sent the defense to Columbia. They could have made just as many stops sitting in their dorms in Tuscaloosa.

Yeah, fuck Ingram, I mean really, why would you ever give the ball to Heisman Trophy winner anyway? I'd definitely put the game in the hands of Opie. You know he hasn't lost since 8th grade, right? Tell 'em 'bout it McElwain.

Hypothetical question..... could our defense have stopped a third and goal from the South Carolina 1

How big of a bust does Burton Scott have to be to not be able to play a single snap in this shitty secondary?

South Carolina made that azz quit. That was the most piss poor defensive performance I've seen in 30 years of Alabama football.

This just in... South Carolina converts another 3rd and 14 after UA boarded team plane.

McElroy has come to the point he can't spot a wide open receiver in a pink neon uniform waiving sparklers. Should have had A.J. in by halftime. 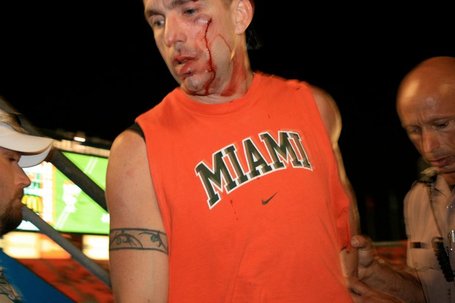 I think I'm going to go hang myself.

I don't care if Miami has to go into debt to get a better staff. Obama, please bail us out!

Shannon seems to be a lesser Les Miles

This is why I love Thursday night games. Less people watching when Shannon shits the bed.

Seriously, if Saban took over tomorrow, how many players on this team would just flat out quit?

Fuck that. Send him to Cuba in the backseat of one of those waterproof Cadillacs

Fuck you Shannon, I hope you die. Imma going to the club I don't have time for this shit

So, what third-tier bowl destination will I not be making the trip to this season?

I liked UM a lot better when the players were thugs. If I wanted this gentlemen shit I'd watch golf.

Harris once again showing why he is the most overrated player in college football.

Oh no, don't talk bad about Jacory, he might get his little feelings hurt, and we don't want him showing up to the Emerald Nuts Bowl and not giving 100%

Get it together people! We werent even good enough to have one of our players invited to those damn agent parties even though they threw them in our own damn backyard. What did you expect?

It all goes back to Shalala, this is what she wants. She doesn't care about winning, her goal is to turn UM into just another pinko PC college.

Right. Shalala is about as interested in fielding a winning football team as NOW is in overturning Roe v. Wade.

Fire Shannon? And get who? The only reason we ended up with Shannon in the first place is because we couldn't lure a guy from Rutgers. You guys do realize that right?

If I hear Michael Irvin's shit one more time I'm going to puke.

FSU beats us on the field, Florida beats us in arrests? What's even the point anymore?

FUCK ALL OF YOU!!!!!!! I told all of you this shit for months but oh no nobody wanted to hear it. You can all line up to start kissing my ass right here

Urban doesn't care anymore. The whole thing is on auto-pilot

Horrible coaching and execution. 8-4 or 7-5 here we come.

Urban Meyer is now 3-3 vs. the dumbest coach in America

Fire Urban Meyer. I don't care. How do you bring the house on a 53 yard FG?

Buying tix for the Peach Bowl

Fake FG. As obvious as the jump pass

We're getting worse than Georgia with this uniform shit

Is the plan for our coaching staff to turn us into the new Ole Miss where we sit around 40 fucking years later talking about Tebow?

The only thing more obvious than the fake field goal was the second fade. Our coaching staff must have the thought process of a Snuggie.

Okay, Bama was holding last week, what we going with this week gang?

Playing PS3, called a fake field goal, and guess what? Some little shit who hadn't even figured out how to stroke off yet saw it coming and stuffed my ass. Explain youself Urban!

I'm just going to float this out there and step away... are we going to get Richt'd?

I thought that SECCG loss just fried Urban's heart, I guess it got his brain too.

Under a minute go to with the lead, opponent has to go 80 yards... JAILHOUSE BLITZ TIME!!!

Urban questioning the commitment of the players? Really asshole? Says the motherfucker who retired ten months ago?

I'm not pissed we lost, we deserved to lose, I'm pissed that LES MILES ran fucking circles around us. It was a miracle it wasn't a blowout

So tell me, what can't miss infallible five star recruits are we getting this year?

Get real people, we worshipped Tebow because we all knew he was the one that made it go. Shit like this should be expected

Who knew Urban was going to retire and coach keep coaching? 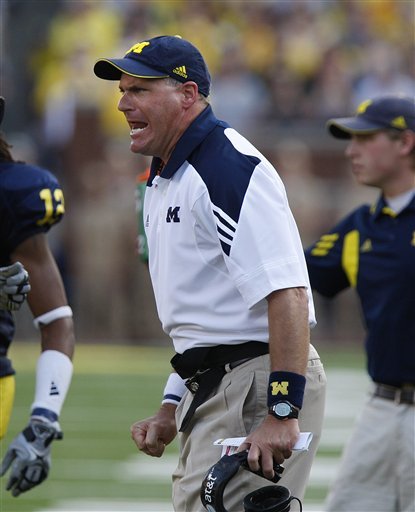 Michigan might be the "Harvard of the West," but the similarity is on the football field, not in the classroom.

When does hockey season start?

If Notre Dame invented that whole thing called the forward pass, maybe we should invent something called a tackle.

This team hasn't done shit, all we've done is copy last year to this point.

Dear RR, I hear they make these things nowadays called defensive tackles. You should check one out sometime.

Admit it, this is what we'll always be with RichRod: a one or two man show on offense matched with a shit defense.

Yeah, top 50 defense is too much to ask for, I'm just a greedy old bastard

How many more days until Ohio State beats us?

By the end of this season RR will be 0-12 combined against MSU, Illinois, Penn State, and Ohio State. Fuck my life.

Worst case scenario unfolding for Michigan... still not worth a shit, just not quite shitty enough to get RR fired

this regime is NOT fit to coach at Michigan

Over a 1,000 days now since we beat Michigan State. Wonder if we can get that up to damn near 3,000 days like with the Fuckeyes?

So, you guys still interested in getting us those Denard 4 Heisman shirts printed up?

The CEO of General Motors. What is jobs that Rich Rod is more qualified for than the Michigan head coaching job, Alex?

Time to pull the plug, at least then there may be something to look forward to

RichRod couldn't even beat a fucking heart attack patient at home. Unless the rest of the schedule is filled with cancer patients, we're screwed

Getting our asses smashed by Michigan State while listening to Matt Millen... any early predictions on the number of suicides?

Fuck you, I say good for MSU that they are winning. Its about damn time somebody in this shithole state started being good at something

Your right, Michigan has been a dying region for decades now but at least we had football. Now all we have is bailouts and NCAA investigations. We're not even good enough any more to get our names mentioned in the agent scandal.