Share All sharing options for: Alabama vs Ole Miss: A Historical Retrospective 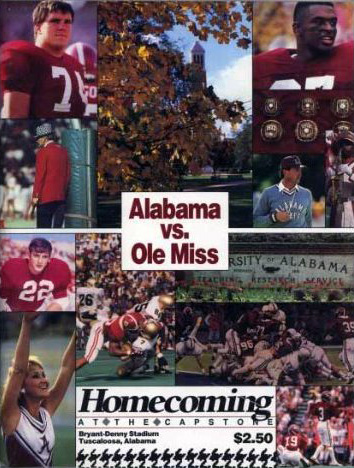 Eighty-one years ago, on Oct 5, 1929, the University of Alabama and The University of Mississippi met on the football field for the sixteenth time. Alabama won the contest 22-7 but the final score didn't really express how one sided the game was. Alabama racked up more than 600 yards of offense while the Ole Miss could only muster a single first down.

The 1929 game would have gone mostly forgotten as a statistical oddity (the Rebels one touchdown came on a 54-yard pass which turned out to be the only time they would find the end zone against the Crimson Tide in the nine games between 1915 and 1930) except it marked the dedication of Alabama's Denny Stadium.

The $100,000 venue was financed through the proceeds from the football team's appearance in the 1926 and 1927 Rose Bowls. The appearance in the West Coast contests put Alabama football on the national map, it paved the way for the program to enter the forefront of Southern football by the construction of a quality home venue for the team.

Alabama football burst onto the national scene in the late 1920s when coach Wallace Wade led the Crimson Tide to a pair of appearances in the Rose Bowl. The 20-19 victory over Washington in 1926 and the hard-fought 7-7 tie with "Pop" Warner's Stanford squad the following year established the Crimson Tide as a major football power.

(Prior to the construction of the stadium, Alabama played most of its home games at Denny Field located at the intersection of 10th Street and 7th Avenue at the southern edge of the campus)

The first game in the stadium was a season opening 55-0 romp over Mississippi College on Sept. 28, 1929. It was the second game of the season, homecoming, that saw the structure formally dedicated and named for the university president George Hutchenson Denny who had overseen the rise to prominence of the football program.

The 12,000-seat stadium consisted of a grandstand on the west side of the field constructed in the model of the Yale Bowl (which was the inspiration for the Rose Bowl as well). The initial plans called for the venue to be expanded to a full bowl that would fit a capacity of 60,000 fans.

On April 10, 1976 the stadium was re-dedicated during the annual A-Day game re-named Bryant-Denny Stadium to also honor Alabama's legendary coach Paul W. Bryant. Since the original construction, the stadium has undergone seven expansions, the most recent of which -- the south end zone expansion -- was completed during the off-season increasing its capacity to 101,821.

When Alabama and Ole Miss meet on Saturday it will be be the 16th time in the venue and the sixth time the contest was also homecoming -- just like in 1929.