Alabama vs Tennessee: A Historical Retrospective

Share All sharing options for: Alabama vs Tennessee: A Historical Retrospective 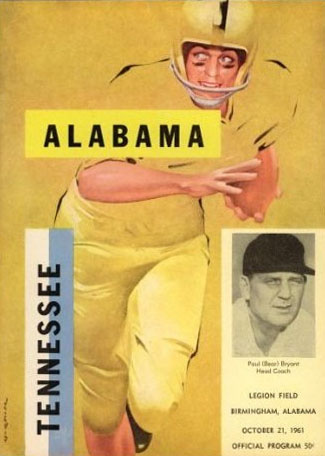 The Third Saturday in October is a rivalry of streaks. Over the 109-years of the rivaly, it has been common for one program will gain the upper hand and run with it for the better part of the decade before the tables turn and the other school has its time in the win column. (Alabama leads the all-time series with Tennessee, 46-38-7.)

For Alabama the woes of the program's nadir in the 1950s was exemplified by the run of futility against the Volunteers. Between 1940 and 1960 the Crimson Tide eked out a meagre 1-9-2 record against Tennessee. Exempting a 27-0 victory in Knoxville in 1954, Alabama was outscored by the Volunteers 188-56 over that span.

So when Paul W. Bryant arrived in Tuscaloosa in 1958, one of the priorities for his program to revitalize Alabama football was getting the upper hand in the Third Saturday in October rivalry.

Bryant's legend as a player harked back to the 1935 contest against the Volunteers when he played one of the best games of his career despite having a fractured shin bone. Skeptical sportswriters were shown the X-rays when they doubted he'd played on a broken leg and Bryant later said "it was one little bone."

But as a head coach his record against Tennessee was less than inspiring. In his eight years at Kentucky he'd only been able to best the boys from Rocky Top on one occasion and never while they were under the direction of General Neyland. Things would be different at Alabama.

As Alabama's head coach didn't start out particularly promising. Alabama had been ineffectual against the Volunteers since 1954 and things didn't change just because Coach Bryant arrived. His first trip to Knoxville resulted in a 14-7 loss but the next season the Crimson Tide managed a 7-7 tie. The W eluded Coach Bryant again in 1960 as Tennessee won 20-7, Alabama's only loss the entire season. 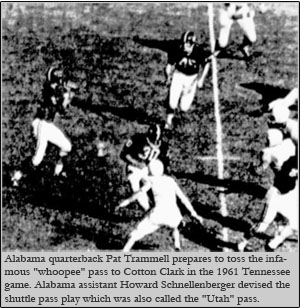 In 1961, everything changed. The Tide was a force that season outscoring their first four opponents 102-19 and climbing to No. 5 in the rankings when the Volunteers came to town.

More than 48,000 fans gathered in the newly-expanded Birmingham's Legion Field to see a game and were kept out of the brand new upper deck since the proper security clearance had not been obtained. The contest was also broadcast regionally on television (incidentally, Alabama's first televised game occurred in the same venue against the Volunteer exactly ten years prior).

Tennessee struck first putting three points on the scoreboard due to a 53-yard field goal booted by George Shuford. They never scored again. Alabama responded by going 59 yards in six plays to score the first Tide touchdown. From there, things got really ugly for the Volunteers.

The Tide ended up winning 34-3 although the crowd was screaming "WE WANT 40!" as time expired ending Alabama's final drive. It was the most lopsided final score in the rivalry since the 51-0 Alabama victory in 1906. But the score didn't really reflect the scale of the win. Tennessee was only able to eke out 38 yards rushing and 23 yards passing the entire afternoon.

Coach Bryant was so proud of his players he gave each and every one of them a ring to mark the occasion -- a red stone with an "A" inscribed on it. Yet it was another gift presented at the end of the game that continues to ring down in Crimson Tide lore.

After the game, Alabama's longtime trainer Jim Goostree handed out victory cigars to all the players and coaches in the locker room beginning a hallowed Crimson Tide tradition. Goostree, who served on the Alabama sidelines for almost three decades and was later inducted into the National Athletic Trainer's Hall of Fame, had a reason to take the Third Saturday in October personally.

He was a graduate of the University of Tennessee.