As noted by several readers this afternoon in the fanshots, the UA athletic department has released the finalized 2011 football schedule. Per RollTide.com, it is as follows: 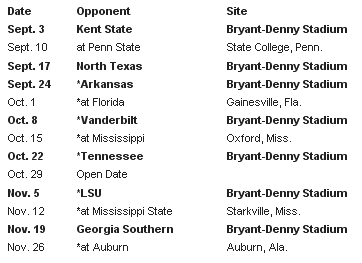 It's always a bit of a shot in the dark when trying to evaluate schedule strength this far in advance, but I must say based on the preliminary look the layout of the schedule seems to fairly promising.

Obviously those road trips to Gainesville and Auburn loom large, but other than that, at this point anyway, I think it's probably about as best as we could hope for. Kent State will be a nice warm-up to start the season, and with all of the struggles that Penn State has had this year, combined with the possibility that this may be the final swan song for Joe Paterno, that road trip does not appear near as daunting as it did a couple of years back. Either way, North Texas provides a nice recovery before starting SEC play.

The following two games against Arkansas and Florida will be difficult, but after those two games we effectively replace the 2010 road trip to Columbia against South Carolina with a home game against Vanderbilt. After Vandy, you get Ole Miss and Tennessee -- two teams to likely still be near the bottom of the SEC once again -- and then an off week before LSU comes to Bryant-Denny.

Given their progress, the Mississippi State game in Starkville the following weekend could be a serious trap game, but if we can avoid the upset there then we get Georgia Southern at home in the tune-up for Auburn. Obviously a road trip to Jordan-Hare will be damn tough, especially if Cam Newton sticks around another year, but at least next year the Iron Bowl returns to its usual Saturday so we won't have any of the short-week issues created by the Friday afternoon kick-off like we had last year and like we will have to face later this year.

Again, things could change between now and then, but for now the schedule layout seems promising.