The Crimson Tide took a little trip to Knoxville this weekend and took the opportunity to decorate the newly renovated Neyland Stadium with the worst beatdown the Vols have ever suffered at that hands of the Crimson Tide in the 89-year-old venue. There are lessons to be learned from Bama's performance but, for now, the important thing is that the Third Saturday in October ended the way it should - with sadness and bewilderment from the orange-clad faithful.

The game started with an eagle flying into Neyland Stadium. By the time it was over, it was more like vultures circling.

Tide fans for two consecutive visits to Neyland Stadium have danced in the empty aisles to the tune of Rammer Jammer Yellow Hammer in the fourth quarter as Vol fans dirged their way to their cars and tried to unhear and unsee what they'd witnessed in our own stadium.

One Alabama team waltzed to the Neyland Stadium locker room at halftime Saturday night. A different Alabama team danced out in the second half. What happened behind those closed doors that transformed the nation's seventh-ranked team, inspiring it to turn a 13-10 halftime lead into a 41-10 victory over the Tennessee Volunteers.

Once again, the Volunteers played with a well-regarded and highly favored opponent for a half. And, once again, Tennessee faded during the final 30 minutes of football, yielding 28 unanswered points to Alabama in the second half, and falling by a 41-10 margin.

Nuclear winter has come before fall even ended in Knoxville. The latest downturn in the collapse of a once-storied athletic program took place on Saturday... Alabama came into town and dismissed the Vols as if they were a high school team.

The seventh-ranked Crimson Tide used big plays to score three touchdowns in the third quarter and turn a tight game into a 41-10 rout. A rout of historic proportion. The 31-point margin was Alabama's biggest ever in Knoxville, surpassing the 28-point gap (56-28) in 1986.

By now, the formula's becoming all too familiar for Tennessee: Hang in for 30 minutes, and then see it slip away.

This is Alabama football in 2010. Stops and starts. Highs and lows. Brilliance and inconsistency. Now this: Some fight. Some honest-to-goodness intensity by imposing its will on an opponent, even if that team happened to be beleaguered Tennessee.

Alabama's opponents have figured out how to limit its powerful running game. Now the seventh-ranked Crimson Tide has shown it can be just as dangerous in the air.

Has Rocky Top touched bottom yet? Stay tuned. At 2-5 and with no wins in four SEC games thus far, Tennessee's Vols are staring into the abyss. How low can they go?

Oh, and if all that wasn't enough, this happened... 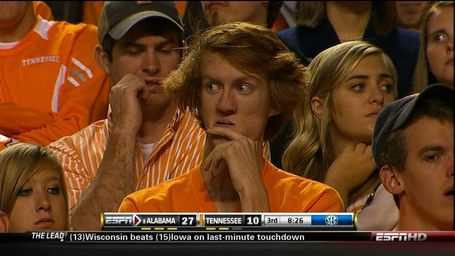