Destination Glendale: Alabama back in the driver's seat?

Share All sharing options for: Destination Glendale: Alabama back in the driver's seat? 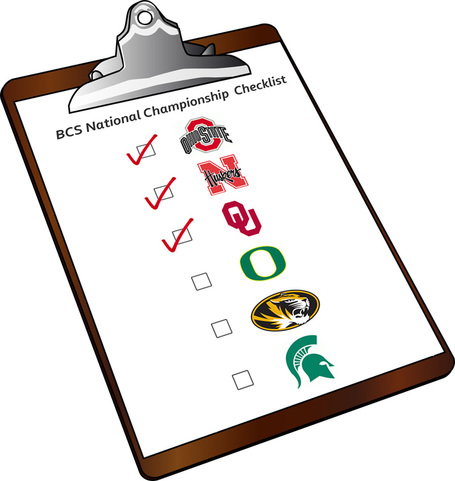 Don't look now, but the past two weeks have been quite kind for the Tide's national championship hopes. With Ohio State, Nebraska, and Oklahoma all going down, only three undefeated teams remain from BCS conferences that are not within our control.

And fortunately, the odds of those teams running the table from here seem fairly low. All three of them, in fact, face very tough road challenges this weekend. Oregon must travel to play USC, Michigan State goes on the road to Iowa, and Missouri goes on the road to face Nebraska. And guess what? According to those who actually put their money where their mouth is when making college football predictions, both Michigan State and Missouri are seven point underdogs this weekend. In other words, it's reasonable to expect both of those teams to go down this weekend.

Even if they can survive this weekend, both Michigan State and Missouri have tough challenges on down the stretch. Michigan State still has to get through Minnesota and Purdue before finishing the year with a road game against Penn State. The remaining slate is even tougher for Missouri, who still has road games against Texas Tech and Iowa State, plus a home match-up with Kansas State. And even if they can go undefeated in the regular season, they will likely still have to go through Oklahoma once again in the Big XII Championship Game. It also does not help matters that Michigan State has a starting cornerback sitting in jail or that Missouri lost a starting defensive tackle for the year with a broken ankle against Oklahoma. Bottom line, while they are undefeated for now, it would be a surprise if either Michigan State or Missouri could ultimately run the table.

Oregon looks to have the best chances of running the table of those three remaining unbeatens, but even they have a fairly tough slate ahead of them. Even assuming a victory over USC, they will still have to beat Washington, Cal, Arizona, and then close the year with a road victory over in-state rival Oregon State in Corvallis. I think it's clear that if any one of the remaining unbeatens is going to run the table that the smart money is on the Ducks, but even for them it's far from a cakewalk. Of the four toughest games on their schedule, three are still ahead of them as of this writing.

The upshot is that for any prospective one-loss SEC team -- hello, 'Bama -- the odds are suddenly looking very good that a berth in the BCS Championship Game awaits. In real terms, Alabama can likely get to Glendale by running the table, Auburn could probably afford an upset against Ole Miss or Georgia so long as they can beat Alabama, and LSU might not be far out of contention if they can run the table and get some help against Auburn. Given the strength of the SEC West, a one-loss SEC champion should probably have no major issue in jumping Boise State and TCU / Utah in the polls, so at this point all that is left is hoping for two of the three remaining unbeatens to fall.

One way or the other, Alabama is now close to once again controlling its own destiny. We ceded that luxury when we laid an egg in Columbia, but with a couple of more timely losses to certain teams -- and judging by Vegas, we don't even need to get any upsets at this point -- we are back in the driver's seat.

That empowerment alone does not make the stretch run for 'Bama any easier, mind you. Three of our four toughest games still remain. The road trip to LSU will be very difficult, Mississippi State suddenly looks like a quality team and that could easily be a trap game, and the Iron Bowl is shaping up to have the look of Armageddon. Furthermore, even if we can finish the regular season 11-1, we're still going to have to get another win in Atlanta or it will be all for naught. We're going to have to run the table if we are to get where we want to go, and we will have to significantly improve our level of play from the first eight weeks of the season to do that. Nevertheless, it would be nice to once again control our own destiny, and two weeks after ceding that to the hands of South Carolina, with another fortunate weekend we'll once again be in that envious position.