A Look Back at RBR's Off-Season Polls

Share All sharing options for: A Look Back at RBR's Off-Season Polls

It's the election season which means we get to revel in the glory of the democratic process at work. Which means incessant phone solicitations and bulk mailings by various candidates/parties/causes. And it means polls. Lots and lots of polls. Not because they really say anything meaningful but because they are something to talk about in the meantime.

Which is exactly why we here at Roll Bama Roll ran a heaping helping of polls in the off-season. We had to fill the long dreary months without college football with something. And now we are two-thirds of the way through the season, it might be a good time to look back and see where the "wisdom of crowds" was deadly accurate and somewhat less so.

Which Alabama Player Will Have A Break-Out Season in 2010?

We left Mark Ingram off this poll since it's hard for the current Heisman Trophy-winner to be a "break out" player in any realistic sense. Still, 2010 has been somewhat a disappointment by any realistic measure. He missed the first few games after a knee procedure, rolled up some nice performances against the creampuffs but has faltered in as Alabama hit the meat of the schedule. Ingram wasn't able to deliver a 100-yard game in all of October.

That said, his teammate in the backfield has certainly made his presence known this year. Trent Richardson is currently No. 2 in the nation for All-Purpose yards. In the absence of Ingram, he's led the team in rushes, rolling for more than 600 yards this year already.Where he has really shined is on special teams. Currently, Richardson is in the top 25 nationally for kickoff returns, averaging almost 27.5 yards every time he catches and runs. In fact he is currently averaging 75.5 yards a game for both rushes and kickoff returns.

Still, Richardson only came in second in our poll earning 17% of the votes cast. Julio Jones was the favorite among our fans with 22%. And Mr. Jones' year hasn't been bad one thus far by any stretch. He's 25th in the nation for receiving yards per game (83.6) and had a field day against Tennessee that ensured his place in the Alabama record book. There's a lot of season left and don't be surprised if Julio goes on a November hot streak that makes us all utter his name in awe (well, more awe than we already do).

Which Alabama Underclassman Is Going to Shine in 2010?

This one we'll have to take the blame on. At the start of the season Sophomore Robert Lester was one of a host of players battling for playing time in a very green secondary. He made the starting lineup and has done quite well. His five interceptions this year and is tied for first in the nation in that category and he's also racked up 32 tackles and a sack as well. He also picked up the longest fumble recovery in the history of Alabama football but the outcome of that particular play is probably a testament to his inexperience as a player. Which is the scary part, he's really really good and almost certain to get better.

The voting public chose Lester's fellow Defensive Back DeMarcus Milliner as the most likely youngster to shine (22%). And while his performance has had moments of brilliance, it really hasn't matched the effort of his companion in the backfield. Ditto for DL Kerry Murphy (15%), RB Eddie Lacy (13%) and DL Darrington Sentimore (9%).

Which Aspect of Alabama's Game Worries You Most?

The thin secondary won this one handily, taking 36% of the votes. This seems a bit pessimistic as the secondary has arguably performed quite well. The Crimson Tide is ranked 4th nationally in defensive pass efficiency and is in the top 20 for overall passing defense. Special teams, which collected a fifth of the votes has done rather well also.

It is arguable that two item we didn't even include on the list would be vying for the lead: "Lack of a vertical threat in the passing game" and "Complete absence of pass rush." As for the 10% of voters who though Alabama had nothing to worry about at all, they've probably jumped on the Auburn bandwagon by now.

Which Team Will Be The First To Beat Alabama This Season?

This poll became a bit of an off-season sensation when the runaway winner -- "Nobody: We're going to run the table again, baby! -- caught the attention of some of the snarkier elements of the college football blogosphere. A full 55% of the respondents said the Crimson Tide would earn their third undefeated regular season in 2010. Beyond that, the most likely team to best Alabama was Florida (16%) followed by Arkansas (13%). The correct answer, South Carolina, who beat the Tide 35-21 in Columbia on Oct. 9, came in fourth with a paltry 4% of the overall vote and just better than 10% of votes cast for individual teams. 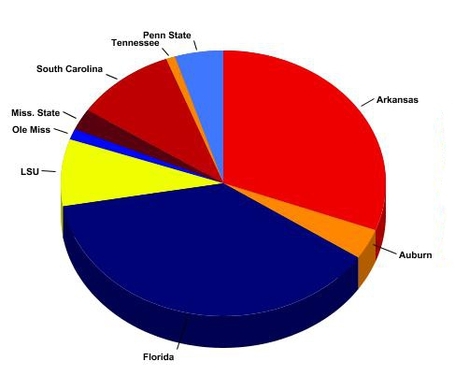 Which Alabama Away Game Do You Want to Attend?

Similarly, relatively few fans thought the trip to Columbia would be worth it as the venue finished dead last among games the Alabama faithful had any desire to attend (7%). The number one game by a huge margin was the upcoming contest against LSU in Death Valley which garnered 41% of the votes. The number two most popular away game was Tennessee which turned out to be all we ever could hope for.

Which Alabama Home Game Do You Want To Attend?

And here you see how much the course of the season changes perception. From the point-of-view of August, the Penn State matchup on Sept. 11 was the game of the 2010 season. It picked up a whopping 63% of the votes in the poll. No. 2 was the contest with Florida on Oct. 2 (19%) Both turned out to be lackluster contests against teams that have faltered badly in 2010. This year's Iron Bowl, which mustered a meager 11% of the vote for third, is now shaping up to be nothing less than epic in every dimension.

Well, Alabama fans are nothing but loyal giving Greg McElroy the top nod here with 34% of the vote. Yet as October draws to a close it's abundantly clear from the fawning adulatory hosannas by the likes of Gary Danielson that Auburn's Cam Newton is the QB of the conference this year. And for good reason. The dude is rolling up better than 300 yards per game and is 6th in the country for rushing. But our poll  in July gave him just 2% of the vote, behind the likes of Arkansas' formidable but disappointing Ryan Mallett (24%) and Florida's underwhelming John Brantley (12%).

Which SEC Out-Of-Conference game are you most looking forward to?

Well, we posted this poll prior to the meltdown in Chapel Hill that forced UNC to bench their entire starting defense for the season opener. Thus the runaway winner of our poll with 44% of the vote, the Chick-fil-A College Football Kickoff game featuring LSU and UNC, was something of a disappointment. It was an exciting nailbiter of a game, yes, but for all the wrong reasons. The number two game on our list was Auburn vs Clemson which got 38% of the votes and, when you compare that contest to the rest of the slate of SEC OOC offerings this season, it was arguably the best of the bunch.

Which OOC Team Should Alabama Schedule?

On Oct. 14, it was formally announced that Alabama and Michigan will open the 2012 season in Cowboy Stadium setting to rest a series of rumors concerning future OOC matchups that were floating about during the off-season. In our pre-season poll the Wolverines earned just 3% of the vote for 7th most preferred foe. Lagging far far behind Notre Dame (20%), USC (16%) and Boise State (16%), the latter who, unsurprisingly, tried to rig the system to get into the big game. Regrettably, we overlooked including Kent State in our poll.

Which SEC Head Coach Is Most Likely To Lose His Job By the End of the Season?

This one is still up in the air but our poll favorite Les Miles (59%) has done everything possible to bring the LSU fanbase to the brink of despair all the while making it almost impossible to give him the boot. The number two candidate, Mark Richt (17%), seemed to be well on his way to earning a pink slip in Septebmer but has righted the ship sufficently since then to likely ride out the season scathed but intact. The only coach on our list that been ousted thus far is Vanderbilt's Bobby Johnson (4%) who announced his retirement in July.

What Movie Scene Should Saban Enact With This Agent?

In the wake of the news that an agent's actions got Marcell Dareus in hot water during the off season sent thoughts of horrible retribution at the hands of Coach Saban through the vivid imaginations of the Crimson Tide faithful. The "ear" scene in Reservoir Dogs won by a substantial margin but it later turned out this exchange from Deuce Bigalow might have been more apt.