The graduation success rate measures for the four-class average - the cumulative tally of students entering college between the fall of one year and the fall four years later. This year's figures count players who arrived on campus from 2000-2003 -- giving them six years to earn degrees.

The overall GSR score for Alabama student athletes was 81%. Four of the school's athletic teams -- softball,  and women's golf, soccer and women's tennis -- led the SEC with perfect 100 graduation rate scores. For Alabama football, the rate held steady at 67% but falling just short of the national average but well above the SEC's average rate of just less than 65%. Only Georgia (68%) and Vanderbilt (93%) had higher football graduation rates in this year's report. 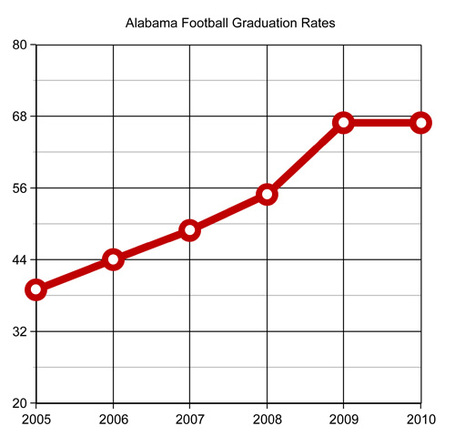 This has been a trend under Coach Saban. Prior to his arrival the football team's GSR wasn't even above the 50% mark, now it's one of the best in the SEC. Over the past three seasons Alabama has seen 31 players compete for the Crimson Tide after having already graduated. In fact, no less than 21 players on the Alabama roster for the 2010 BCS National Championship Game already had their degrees.

Conference-wise, the SEC did quite well in the NCAA report. The graduation success rate for the conference's student athletes was 72% and only bested by the Big Ten's 78% (note that this is all sports, not just football).  The ACC matched the SEC's 72% while The Big XII  tallied 67% and the vaunted Pac 10 only mustered 65%.

Here is the six-year trend for each of the SEC schools' football programs broken down by division: 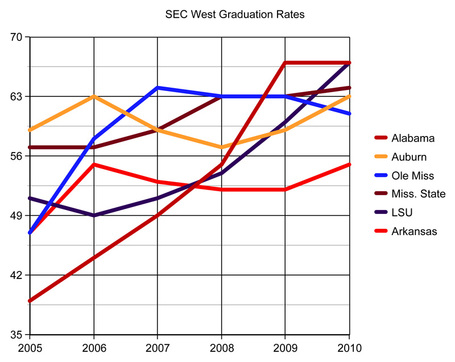 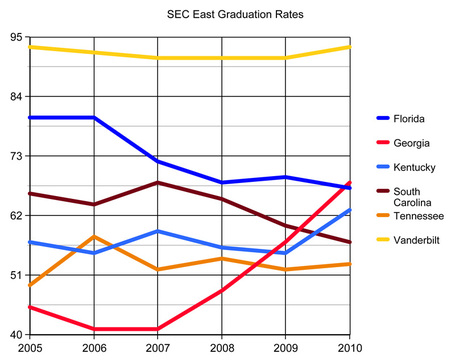 And here are the raw numbers for football only from the NCAA's database for Graduation Success Rates: