Despite the Dexter-esque dissection of the Gators on both sides of the ball in Tuscaloosa on Saturday, not a lot of headway was made in Mark Ingram's bid towards the all-time rushing record. His first two outings of the year were for 151 and 157 yards. Ingram gained a mere 47 yards on 12 carries against the Gators. Ingram needed 96.8 yards per game after the Arkansas game to break the record. He came up 49.8 yards short of that total against the Gators. This will mark the first week that Ingram hasn't met the minimum yardage goal, so the average will rise this week. He'll need roughly 103 yards per game for the next eight games in order to break the record. His 47 yards were enough to put him even with Johnny Musso for 4th place on the all-time list. 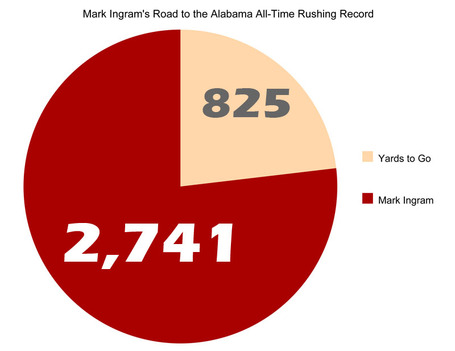 Things went quite a bit better in the TD department for Ingram. He needed 1 TD per game to be on course to break Alexander's record and he doubled up on that. He passed Johnny Musso against Florida to take 2nd place on the all-time rushing TD list. 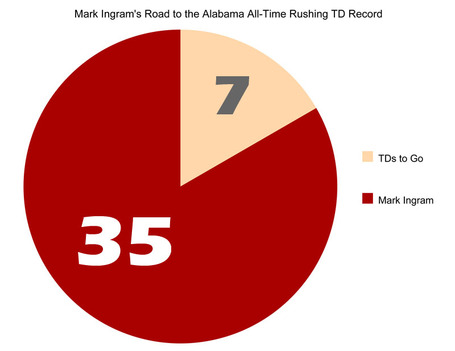 No progress this week towards the record for all-time 100-yard rushing games. He needs half of the eight remaining guaranteed games to break this record. 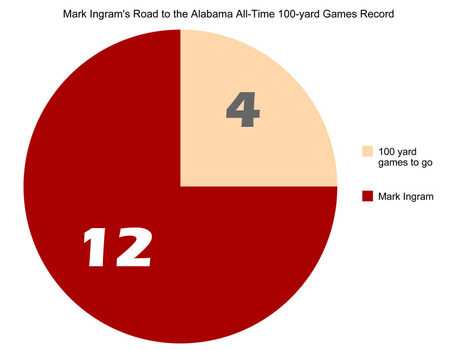 Beginning this week, we're also going to start watching Julio Jones' progress towards the all-time career reception record. It's a ridiculously long shot that he'll break it in that he needs 8.75 catches per game over the next eight games to top D.J. Hall's mark of 194. Even if Jones doesn't surpass Hall, he will likely climb to #2 (he'll need 27 catches or 3.4 catches per game to claim that spot.) Jones had four catches against the Gators. 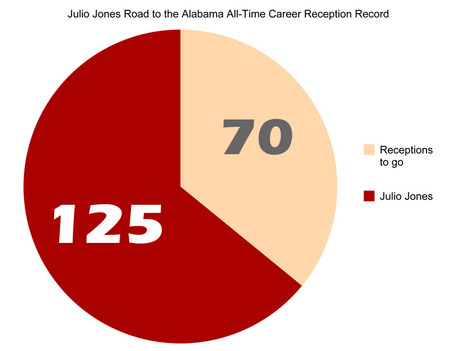 Greg McElroy is unlikely to pass Brodie Croyle's all-time TD passing record, but he will likely wind up in the Top 5 at season's end. McElroy would need 2 TD passes per game over the next eight games to break Croyle's record. Interestingly enough, ESPN currently projects him to finish the year with 17 TDs (he currently has seven), which would give him sole possession of 3rd place and one TD ahead of Andrew Zow and Mike Shula. McElroy only needs five more to crack the Top 5 though, which is 0.56 TDs per game over the next five games, something that'll surely happen. The Florida game was the first game of the 2010 season that McElroy didn't throw a touchdown pass. 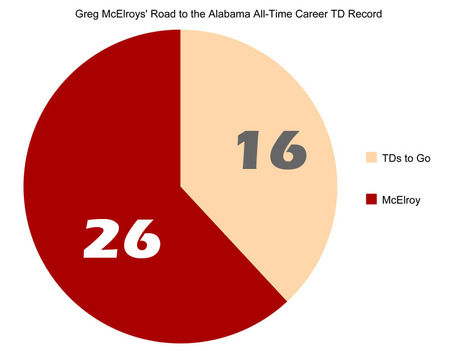 There's pretty much no way on earth that McElroy is going to break JPW's career passing yards record, but he's still likely to finish his career at The Capstone among the top 5-6 to ever play for QB for the Tide. So, while breaking the all-time record is nigh impossible, we'll still chart McElroy's climb up the leaderboard to see where he finishes among Bama legends. He currently sits at #10. 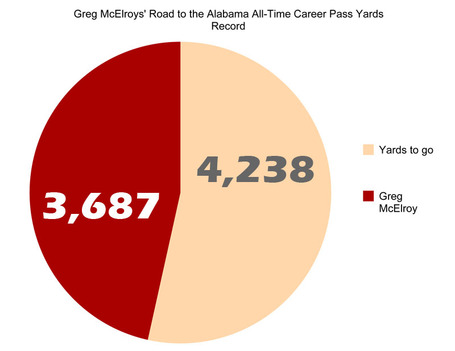