Epic week in the world of meltdown time. Several big losses were scattered throughout the college football landscape, and meltdown material flowed down from the Internetz heavens in great abundance.

The winner this week, of course, has to be LSU. If it can be said that Ole Miss has never lost a party, well, then LSU has sure as hell never lost a meltdown thread. Who knows, perhaps that is really the only victories that Miles cares about anyway? If nothing else, it would explain so many things. The Bayou Bengals weren't the only ones to make an appearance this week, though. Georgia had their fourth consecutive meltdown, Florida took the loss to 'Bama the hard way, and the Texas fans really just aren't big fans of their coaching staff, or their players, or well pretty much anything related to their football program at the moment.

As always, the language gets very, very bad. (ed.- I cannot stress this point enough; do not read any further if you are offended by such things.  It's bad this week folks.  Even I was a little uncomfortable reading it.) You've been warned. Enjoy after the jump: 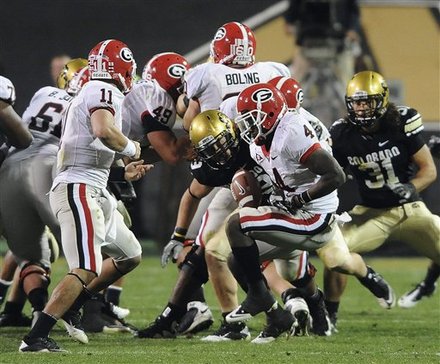 To that Bama fan who posts internet meltdowns: fuck Off! You certainly have a lot of material tonight. We suck, and wejust finished the first trimester of this abortion of a season.

Goff's worst teams would beat the shit out of this team.

I'm 47 and I can't remember when a UGA team was this fucking bad. Even Goff's worse team would have kicked the shit out of these pussies.

I would rather stare at that pile of shit than watch this horrible UGA team humiliate themselves week after week. I have run out of superlatives to explain how bad the players are, how bad the coaching is and on and on.

Our fans should wear bags over their heads at the next home game.

Mark it down, we will be Dooley's signature win next week.

I just know the Braves are going to choke too. Fuck my life.

If we can't beat Colorado, Idaho St can beat us.

i think Jim Donnan is available

why did we get rid of Jim Donnan again?

I'll contribute to the buyout

I think we have the ability to lose every game.

I'd rather see the Graduate Assistants coach the rest of the season.

DO NOT Blame the players you fucking dumbass!!!!!!!!

want to bring it ??? cocksucker....yaeh you motherfucker call me a dumbass again

anyone think Bobo is on the take

You heard the saying don't tear down the house to fix the faucet? Well the whole damn house and flooded and the drywall is rotting and we've got fleas and every other god damn type of problem. TEAR THE HOUSE DOWN!

Erased from the DVR, too bad it can't be erased from my inebriated mind.

At this point even Goof is embarrassed to have his name associated with UGA football. 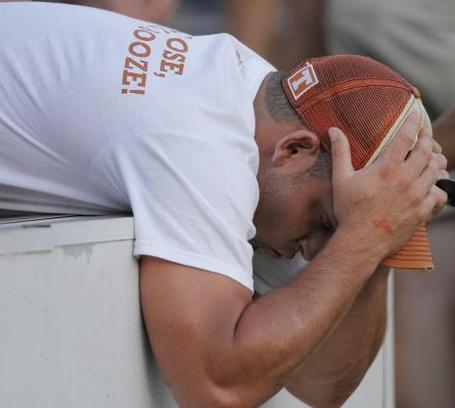 This years team is dogshit.

This is quite possibly the most undisciplined worthless piece of shit TX team I have seen since the Mackovic era.

we're undisciplined, overly confident, and fucking entitled cry babies... go earn that Horn on your helmet... this shit is terrible..

The defense is not playing well, either, but holy shit Greg Davis is terrible.

greg davis needs to die in an aids fire.

I would shit on his face while his wife blows me

He's a millionaire and he's worse at his job than pretty much everybody in this thread.

Anyone have a rope? I know where there is a bridge.

FUCK YOU MACK AND DAVIS! FUCK BOTH OF YOU!

Fuck. Fuck fuckity fuck. Fuck u all for caring about this shit. And fuck me for wasting my time. I could have been fapping on nsaa instead of watching us fap on offense, fap on defense and fap of special faps! Where's the tylenol?!

This is a fucking disaster of a season.

I hope we lose every fucking game here on out if it means a regime change.

Somebody please fucking kill me now.

God why are you teasing me like you teased Moses in the desert?????????

Hangem high all of them! Fuck this season, fuck the coaches!

WHY COULDN'T WE HAVE SCOOPED THAT FOOTBALL AND SCORED???????? fuck this I'm converting to Islam

goddamnit why do the football gods hate us

where is my damn dog. I've got to beat something.

this is a pile of flaming dicks

I got season tickets on sale now for 50 cents a seat! Everything must go!

Shit. I wouldn't take even money on this team winning the bye week.

So this is how aggy felt on Thursday night. Well, minus the thoughts of fucking an animal to feel better about the loss. 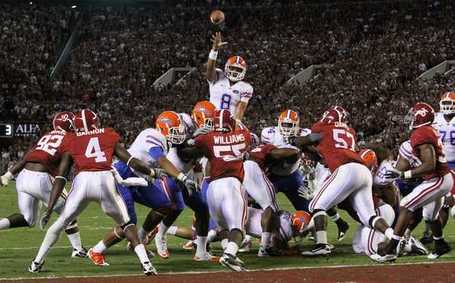 At this point all Urban did by coming back was to go stand on the sideline and collect paychecks.

We can't even stop their 3rd string RB.

Addazio will be the only Asst. Coach that won't get hired away from Meyer.....Aren't we lucky?

Steroids... There must be a full supply in Tuscaloosa. Either that or they have an all world S and C program compared to ours.

Any recruits that want to play in Florida's offense are retarded.

Mike Pouncey is the worst center in the country.

Meyer needs to either coach or retire. can't be a part time coach at this level

Seriously Urban, the jump pass? It seems like after five years that opposing defenses might have caught onto that one. Just throwin it out there as a possibility.

How can a team with this talent get embarrassed like that?

Fuck you Janoris Jenkins, shit talking cuz you broke up a pass when the damn scoreboard says 31-6

Proof that anything is possible: One time, Ron Zook beat Nick Saban

I liked it better when Bama was our bitch

Arrogance, all we do is talk shit, even as Bama thoroughly beats our ass 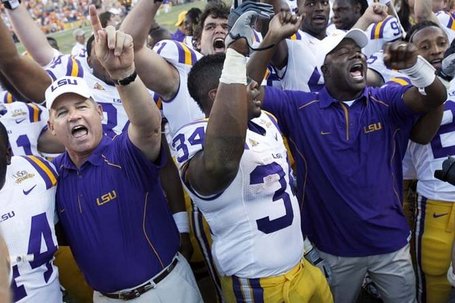 JJ should not see the field again as a tiger!!!Fire Miles,crowton, and Aliva

Absolutely embarrassing. That was all about winning in spite of our coaching, not because of it. UF and Bama are licking their chops.

If Lee plays an entire game, he'll have 400 yards in passing and 9 interceptions.

The clusterfuck at games end lies solely with Miles

fire his ass NOW, win or lose. do it tonight and tell him to pack his bags

We dont deserve this break

we don't deserve that. At all.

The luckiest win I've ever seen in my life

Unbelievable. The next few weeks are going to be truly ugly.

We did not deserve this win. Period.

To all you dumbdicks saying we got lucky, we still got Miles and Crowton as our coaches, we ain't that fucking lucky.

He must resign if he has any pride or honor.

Congrats to the Tigers. But a big

to Miles for getting us into that position.

No, we are actually unfortunate. But all that will be borne out soon enough

I guess we should welcome our crimson overlords

Les is too stupid to know he's stupid

WHO WANTS TO GO IN ON A MOVING TRUCK TO MOVE MILES RIGHT NOW???

I'm saying our current coach is a certified retarded fuck. The grass is greener. This grass is dead. This grass is a dusty field with glass shards and rocks in it and a car on blocks sitting there.

I sure hope we can beat McNeese State and ULM.

FIRE EVERY LAST ONE OF THEM, RIGHT NOW. I’M DONE WITH THIS SHIT

I'll be honest, even after the game winning touchdown, I just sat down on my couch and cried like a baby. I love LSU, it's such a beautiful thing. My great grandparents were alums and with any luck my great grandchildren will be too. So wonderful, and it's just getting raped by incompetence. It hurts so much to watch this done to my beloved alma mater. And it will get worse, much worse, and I know it.

The worst is yet to come. Think about that.

Hey... at least Miles didn't try to send in the field goal unit!

I can't believe i'm saying this with an undefeated team, but someone has to get this guy the hell out of town!!!

Admitting you have a problem is the first step towards recovery. The Miles supporters out there are simply living in denial. The majority of us saw all of this crap coming back in '05 when UT came back to beat us in overtime.

I saw this coming when Skip was interviewing him for the coaching position at LSU. I was a paying member of tigerbait.com when he was hired and the displeasure I felt at the thought of this moron running this program ended up getting me banned from the site. The problem is he's still here... and he's not done doing us in yet.

I don't know how anyone can feel good about this win. Actually....we did not win....Tenessee LOST it.

Miles didn't pull today's win out of his ass - he had it forcefully shoved UP his ass despite his best attempt to run away from it.

The sad thing is that LM still has Ferrari and has it so messed up it runs like a Kia.

Reasons to keep Miles: he is clearly the luckies motherfucker to ever live. Reasons to fire Miles: everything else.

Positiger is a bull shit word. It stands for "I have my head up my ass."

All right positigers, we play Bama tonight, what's the score? And if you say anything other than what Nick Saban fucking wants it to be your retarded

I love the people who still try and defend the coach that every media outlet and fan base think is an absolute laughing stock.

I'd trade Miles for Curley Hallman at this point

Saban is screaming at a punter with a 24 point lead...Our coach is shrugging his shoulders, throwing players under the bus, and unable to explain what happened at the end of the game. That is the difference.

LSU football is like an episode of Gilligan's Island: U tune in every week hoping the plan to get off the island will work, but your never surprised when the guy in the silly hat fricks it up at the end of the episode.

Miles has become to Alabama fans what Shula was to LSU fans.

I miss that mean sonofabitch. I'd sell the kids up river to get him back.

Saban may ass rape Les Miles on National Tv. It may be a humiliating blow out.

To all the sunshine pumpers blowing smoke up my ass, seriously what would it take you to convince Miles is not the man? Blowout losses to ULL? Winless in conference play? 0-12 season? Get him on tape giving 100k for a recruit to sign? What? Obviously three years of mediocrity, having him become the laughingstock of the nation, and turning into the bitch of every major SEC program is not enough.

Les Miles is George Costanza. He's going to wear a skin colored bodysuit to the uf game hoping to be fired.

you owe costanza an apology.