Alabama By the Numbers: The Kids Are Alright

Share All sharing options for: Alabama By the Numbers: The Kids Are Alright

Following Alabama's 2009 National Championship run, the Crimson Tide saw an epic amount of attrition due to  graduation and the NFL Draft. The conventional wisdom going into the 2010 season was that a defense returning just two starters would lag behind as the young players got up to speed and gelled as a unit. The offense, widely expected to be phenomenal due to the return of Greg McElroy, Mark Ingram and Julio Jones, would have to carry the load till then.

Five weeks into the season has Alabama still undefeated and at No. 1 in the polls. So everything is going as planned, right? Well not exactly, but you won't hear us complaining.

Alabama's offense certainly has taken a substantial step forward. It is racking up an average of 37.8 points per game -- the best in the SEC, good enough 16th nationally and almost two field goals better than last year's figure. But as good as the offense has been, the young defense is even better. Right now the Tide boast the No. 1 scoring defense in the nation allowing allowing just nine points per game -- more than a point less than the number two team in the land, Iowa.

You might have noticed Alabama has scored a hell of a lot this season but what is really amazing is how fast they are in doing it. Here's the cumulative breakdown of scoring in each game this season by period (Table 1). 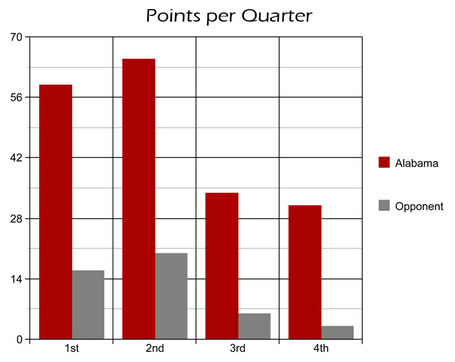 Opposing offenses are getting their licks in early as well with 80% of their points coming before the bands take the field. But those attacks have been anemic at best and peter off to nonexistent after the intermission. No team this season has been able to find the Alabama end zone in the second half of play.

Given the dominance on the scoreboard this season, one would expect a vast difference in the yards accumulated by Alabama's offense versus yards the defense allowed. That's not quite the case (Table 2): 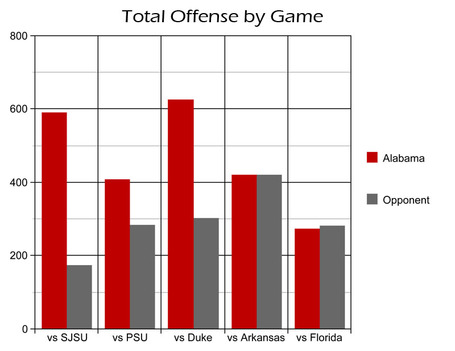 Things start as you expect in the first three games but  have changed dramatically with the onset of conference play. The Crimson Tide's offensive yardage was dead even with Arkansas and Florida actually had eight more yards of offense than Alabama last Saturday.

This would seem to suggest the Alabama passing game has been speeding things up but, instead, there doesn't seem to be a wide disparity in production of one unit over the other when looked at in context. Alabama is currently rolling up an average of 464 yards per game, good enough for 20th in the nation. And the defense is permitting 292.4 yards per game, putting them 20th in the country as well.

Coach Saban has long stressed third down defense as a key for the team's success and its a nice spot to break down what is happening here (Table 3). 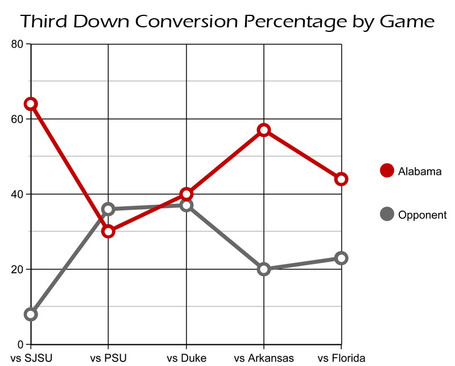 On offense the jump in productivity isn't tough to miss. Alabama is currently 19th in the nation for third down conversions (48.98%) which stands in stark contrast from last year when the Crimson Tide finished 62nd in the country (39.18%). The result is Alabama is now No. 3 in the SEC in Passing Offense, Rushing Offense and Total Offense and placing quite well in each of those categories nationally.

On the other side of the ball it seems to be the same story. Currently the Tide is permitting just more than 26% of third down attempts, putting them 5th in the country. That's actually an improvement over the 29.90% (58 for 194) that earned last year's squad the rank of 7th in the nation.

So what is the factor pushing the Alabama defense into this kind of dominance? How are they keeping other teams off the scoreboard at a level that matches the offense's putting points on it? Sometimes a picture tells you more than any chart or graph... 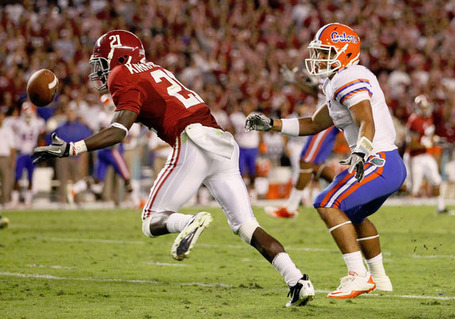 Last year Alabama posted a ridiculous +19 turnover margin, fourth best in the nation and a number quite a few folks decried as unsustainable and likely to come crashing back down to earth this season. Hasn't happened. According to the NCAA, Alabama is currently 8th in the nation for turnover margin with a stout +7. Moreover, the +1.4 per game is eerily close to the +1.36 from 2009.

And the reasons why are pretty much the same as last year.

Greg McElroy has thrown just three interceptions this season, which is disappointing only in comparison with last season when he had a whopping total of four. And the Crimson Tide continues its stingy ways in terms of lost fumbles. The school says there have been two lost and the NCAA says it's three. Other sources put the number at four. But no matter how you count 'em, you can do it on one hand.

Long drives and a surfeit third down conversion matter little when they are killed by a turnover and the Crimson Tide defense has specialized in providing them. The two fumbles recovered by the Tide put Alabama almost exactly on the national average but the interceptions remain this squad's stock in trade.  Currently, Alabama is tied for 2nd in the country in total interceptions and 3rd in picks per contest.

While the young secondary was our number one off-season concern, the fact is these kids have produced. Robert Lester is tied for first in the nation with four picks and Dre Kirkpatrick's three isn't anything to sneeze at either. Coach Saban says they need better discipline and must focus on not giving up big plays, but it's clear they are working to reach their vast potential.

Nowhere is all of this more evident than Alabama's red zone defense which stands at No. 3 in the land in terms of efficiency (57.14 score percentage). And that's part of the plan. As Coach Saban explained it on Monday:

"When the field shrinks and you play pass defense in the red zone, you don’t have the vertical separation in the field like you have when the ball is out in the field. Everything gets condensed, the area for the quarterback to throw gets condensed... They have more people in a lot less space and we’ve done a pretty good job of executing what we do."

Opposing offenses have gotten within the Alabama 20-year-line this season on 14 occasions and only twice have they finished the trip to the end zone. On six other occasions they settled for a field goal. The rest of the times, the offense saw very very bad things happen: three interceptions, two lost fumbles and one loss of the ball on downs. All just the way Coach Saban likes it.