Share All sharing options for: Alabama vs South Carolina: A Historical Retrospective 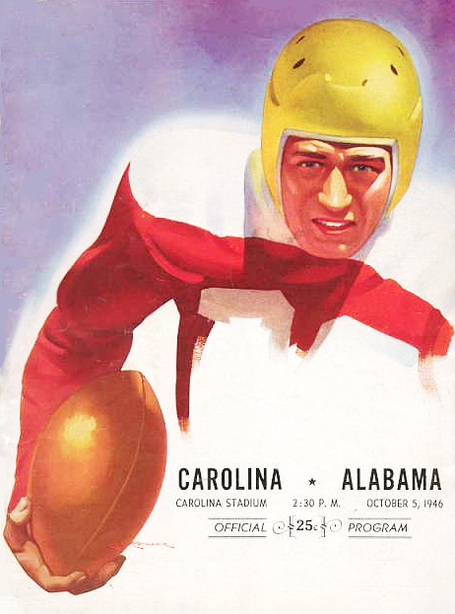 The opportunities for the Crimson Tide and the Gamecocks to face off on the gridiron have been relatively rare due to conference affiliations. All told the two teams have met only 14 times over the last 73 years with Alabama earning an 10-2 record against South Carolina over that span. 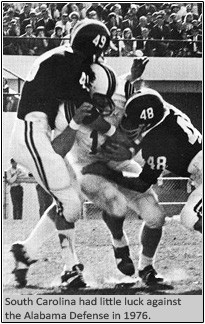 Until the mid-1970s, South Carolina was a member of the Atlantic Coast Conference and with Alabama in the Southeast Conference which limited the opportunities for the two to play each other.Until the Gamecocks joined the SEC in 1992, matchups between the teams came almost entirely from two three-game series - one in the 1940s and the other in the 1960s.

The exception was first game between the two teams held on Oct. 9, 1937 and Alabama simply overwhelmed the visitors from the Palmetto State. A rainfall left Denny Field a soggy mess and, according to the UA archives, tackling suffered as a result. One 75-yard Alabama drive resulted in a fumble on the South Carolina two-yard-line. Still, the dominant 1937 squad wasn't significantly challenged and their run to an undefeated season continued on (at the end of the year they had outscored their opponents 216-13).

While South Carolina was a member of the ACC, it was unable to garner a win against the Crimson Tide. In fact, out of the seven games played before the Gamecocks joined the SEC, the were only able to score against Alabama on two occasions -- in 1946 and 1965. This is partly bad luck as South Carolina scheduled it's games against Alabama during the dominant runs at the Capstone of Frank Thomas and Paul W. Bryant.

With South Carolina in the SEC East Division, the matchups have come more regularly but not exactly often. With last year's contest in Tuscaloosa, the Crimson Tide and the Gamecocks have now met as many times as fellow conference members as not. Interestingly, last year's game marked the first time the two teams met with both ranked in the AP top 25.

With Alabama's victory in Pasadena on Jan. 7 to claim the 2009 National Championship, Coach Saban became the first coach in college football history to claim the title at two different schools. His reward in 2010 is having to face each of the other three SEC coaches who have also won national championships and the second of those contests takes place on Saturday.

Steve Spurrier's tenure at Florida from 1990 to 2001 saw the Gators earning the National Championship in 1996. Ole Ball Coach vied against the Crimson Tide a total of nine times in that span earning a 6-3 record that included three SEC Championship victories.

Alabama bested Coach Spurrier in 1992 SEC Championship on the way to the National Championship. The Crimson Tide endured a string to conference championship losses to the Gators until 1999 when they emerged victorious in the Georgia Dome after already besting Florida in a regular-season contest.

Coach Saban is undefeated against the Gamecocks, besting them twice as the head coach at LSU and the victory last year at Bryant-Denny Stadium. His record against Steve Spurrier stands at 1-2. Coach Saban and Coach Spurrier met in 2000 and 2001 when both men were at the helm of the previous college programs they led to national championships.