I would have figured this one would have opened the other way, but according to those who put their money where their mouth is on NCAA football predictions, Alabama has opened as a three-point favorite over Auburn.

Obviously the betting lines in Vegas can change throughout the week, but for now this one comes as a legitimate surprise given how these two teams have played in recent weeks. In the first six weeks of the season Auburn pulled out a lot of ugly wins over relatively middling teams where their opponents missed easy opportunities to win, but admittedly in recent weeks they have played much better. The defense really has not improved, but the Auburn offense looks more and more unstoppable with each passing week, and that has powered them down the stretch. Meanwhile, Alabama has been seemingly spinning our wheels for several weeks now, and there are legitimate issues on both sides of the football.

For what it's worth, Vegas has been bullish on our Crimson Tide all season, and frankly have been for the better part of three years now. To the best of my knowledge, 'Bama hasn't actually been an underdog in a regular season game since The Blackout in 2008. Having said that, though, we were pretty heavy favorites against both South Carolina and LSU, and we all saw how that turned out, and at other times this year we have failed to cover the point spread (see Ole Miss). It's re-assuring to note that Vegas is still high on us, but obviously that does not guarantee anything moving forward.

One way or the other, the Cam Newton melodrama might -- and I'd bet will -- come back to haunt Auburn in the end, but they have made it clear in the short-term that Newton will play against Alabama, and we will just have to find a way to beat him, a bit of a frightening thought given how poorly our defense has played against the likes of Stephen Garcia, Jordan Jefferson, and Jarrett Lee. At the risk of being overly cynical, we're going to have to play at an extremely high level in order to win unless Auburn just gives us a lot of gifts with poor play. Nick Saban was forthcoming earlier in the week with the fact that we will have to play our best game of the year in order to have a chance to win, and I see no real reason to doubt that statement.

Meanwhile, the extended weather forecast courtesy of our beloved Nickatator's favorite channel has this shaping up to a glorious football weekend. It looks to be a tad bit chilly in the later stages of the game, but we should have lots of sun and very little wind. 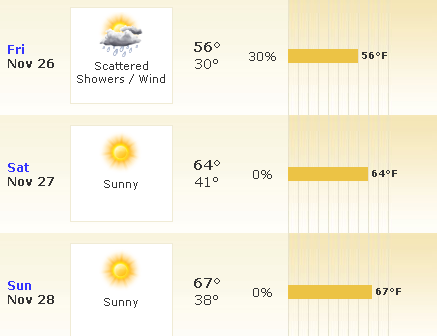 Now, as always, my usual caveat is that there is no greater scam of a profession than those predicting the weather, and weather forecasts more than a day or two out can be very unreliable. Nevertheless, we should all probably hope that moving forward that these forecasts hold true. Given how run-heavy the Auburn offense is and as much as they incorporate misdirection plays, lots of wind and rain and a slippery playing surface may actually benefit them. On the other hand, though, given how our running game has disappeared in recent weeks and the weaknesses of the Auburn defensive backfield, we're likely going to have to move the football through the air, and in particular lots of wind could have a major negative impact on that. For now, hope the weather forecast holds.