Share All sharing options for: As Expected, Weathermen Still Incompetent

God I hate weathermen. Earlier this week they told us it was going to be glorious football weather this weekend. But now, not so much. 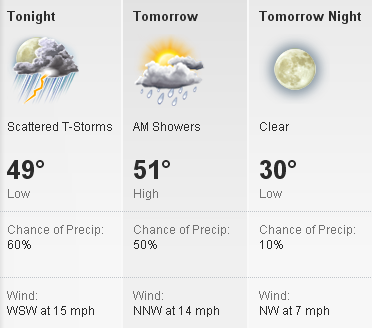 It looks like we should narrowly miss out on rain during the game tomorrow, but having said that it looks to be pretty rainy in Tuscaloosa for the next 18 hours or so, and given the drainage issues that we have with Bryant-Denny Stadium the odds seem pretty likely that we will be playing on a slippery and soggy track, and it will probably be pretty chilly in the latter stages of the game as well. Moreover, wind isn't shaping up to be extreme, but there does look to be a fairly stiff breeze throughout the afternoon, so that could have a tangible impact on the kicking game as well.