Share All sharing options for: Alabama vs Mississippi State: A Historical Retrospective 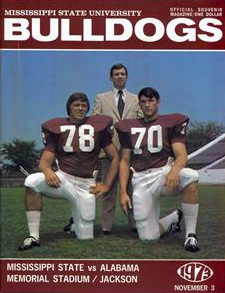 While the ranks of teams wanting to ruin Alabama's aspirations to greatness have never been wanting for members, it is the Mississippi State Bulldogs who can likely claim the greatest success at decorating the Crimson Tide's punchbowl in their own distinctive manner.

The crown jewel of the team's legacy for thwarting Alabama's hopes is the 1980 contest on All Saints Day at Veteran's Memorial Stadium in Jackson, Mississippi. Emory Bellard's Bulldog squad downed the Paul W. Bryant's No. 1-ranked Crimson Tide team 6-3 and brought to an end one of the most dominating runs in the history of the Alabama program.

The Crimson Tide's powerful wishbone running game only eked out 116 yards against the Bulldogs, a staggering figure given it was averaging better than 300 yards a game to that point. Alabama could only muster 64 yards in the air to make up the difference.

Neither team managed to find the opposing end zone. Alabama's kicker Peter Kim nailed a 49-yarder in the second quarter to give the Tide their only score of the day. The Bulldogs' Dana Moore hit  two in the second half, one from 37 yards out and the other from the 22, to put State ahead. Alabama's four lost fumbles made the difference and none more than the last.

Alabama Quarterback Don Jacobs led the tide on a furious 44-yard drive in the game's closing minutes. With the ball on the Mississippi State four yard line and just 25 seconds left in the game, Jacobs was nailed in the backfield by Bulldog defender Tyrone Keys and fumbled the ball. State's Billy Jackson recovered and one of the greatest eras of Alabama football came to an ignominious end.

Following the game, Coach Bryant visited the Mississippi State locker room and congratulated the Bulldogs on their victory and a cottage industry printing "I was there when we beat the Bear" bumper stickers was born.

The 1980 game also brought Alabama's longest winning streak against a single team to a close. Prior to the 1980 contest, the Crimson Tide had bested the Bulldogs in 22-straight games. It also marked the first time a Mississippi State team had beaten a Bryant-coached squad as their previous win had been in 1957, the year before his arrival in Tuscaloosa.

In the wake of the loss to State, Alabama fell to No. 6 in the polls and would not regain the No. 1 ranking for 28 years. That run was ended when the Tide was took the top place in the polls on Oct. 27, 2008.

Still, the Bulldogs have helped the Tide bring a few unwanted streaks to an end as well. In 1956, a 13-12 victory over Mississippi State in Tuscaloosa brought Alabama's longest losing streak to a end. The Crimson Tide had lost a stomach-turning 20 straight games under the hapless J.B. Whitworth until Wade Walker's squad came to town. The win also brought to a close the longest string of home losses by the Tide - seven.