Share All sharing options for: Drowning in Tears on 'Ol Rocky Top

Couple of quick blurbs on Tennessee and their epic choke job tonight. First comes from Tennessee athletic director Mike Hamilton, bemoaning the lack of a ten second run-off rule in college football, a rule that if in place would have ended the game when North Carolina was flagged for having too many men on the field prior to the last second spike:

While I'm sure it sounds like sour grapes outside TN, tonite was sure great study in why college FB should have the NFL 10 sec run off rule

No, Mike, the only thing that tonight was a great study of was how having a terrible athletic director can cripple a football program. Seriously, why are you complaining about anything? Do not call attention to yourself. Your "accomplishments" consist of three losing seasons in six years, the demise of Phil Fulmer, the hiring of Lane Kiffin, the midnight departure of Lane Kiffin, the hiring of Bruce Pearl, the lies of Bruce Pearl, ongoing NCAA investigations into both the football and men's basketball program, hostesses-come-hookers, and countless arrests and academic issues. I'm being honest here, there is probably not a single person in the entire country less deserving of retaining their role in their current position than you. Smokey is more qualified to be Secretary of Defense than you are athletic director in the SEC.

Your school didn't lose tonight because of some dumb college football rule. Your team lost tonight because the program you are responsible for has been a moving trainwreck for the better part of a decade. That's why your school lost in some laughingstock bowl to a basketball school from a basketball conference that has seen more personnel attrition in the past four months than any other college program in recent memory. Given all that, I'd advise that you just lay low and pray that someone in Knoxville doesn't suddenly get into the double digits in IQ points and realize that you're one of the biggest underlying problems in that open sewer.

If there is a problem in college football today, it is not the lack of a ten second run-off rule, it is the continued employment of grossly incompetent people, such as yourself, in highly important roles. And frankly, as a closing point on this rant, if you are going to seriously engage social media, I'd suggest you hold off Twitter for a while and begin by showing your head coach how to use Facebook.

The other blurb I want to rant about comes via a postgame quote from senior wide receiver Gerald Jones:

"I've said it a lot during my career, and I'll say it again: 'What did we ever do to deserve this?'"

I don't think you want to get me started on that one, Gerald. Now, look, I know the loss has to be tough, so I'll play nice and give you some friendly advice: Stop asking that rhetorical question before somebody actually comes along and answers it for you.

Addendum: From a reader, a nice game summary from Facebook. The names have been blurred to protect the idiots innocent. Enjoy: 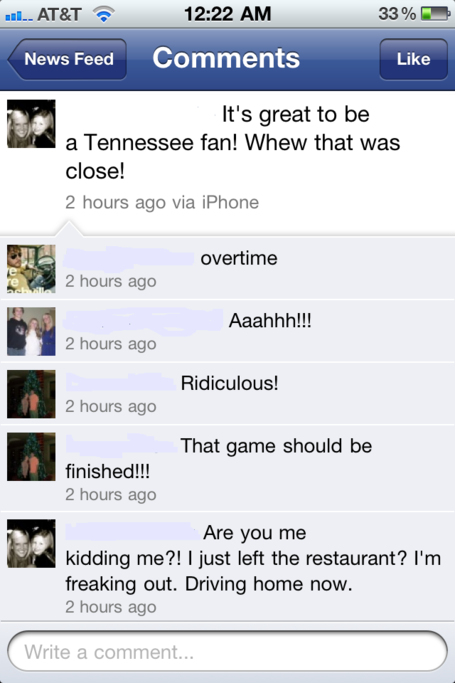