Alabama's 2010 Regular Season By The Numbers

Share All sharing options for: Alabama's 2010 Regular Season By The Numbers

With the 2010 regular season on the books and just the bowl game left to put a post script on the proceedings, it is probably time to start looking at what has transpired over the past three months with a bit of perspective. God knows it's not likely to take away the sting of November any time soon but it could possibly put a jump start on coming to terms with it all.

Keep in mind, this is not intended as any type of definitive analysis but rather it's a first glance at the numbers as we start to examine the 2010 season in retrospect. With that in mind, perhaps the best place to start is with the old mainstay's of measuring production -- yardage totals. Here are the regular season rushing and passing yards for the Alabama Crimson Tide over the past three seasons: (All the data used here is via the University of Alabama Athletic Department.) 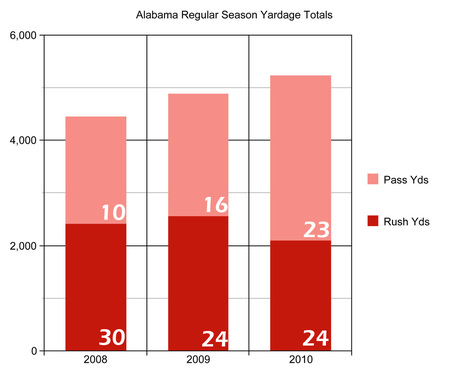 Regular season games only. Touchdowns for each category indicated in white.

Given the amount of talent in the backfield this season, the decline of the running game this year is simply astonishing. Alabama finished 12th in the nation last year in yards per game. They are 35th this season. And nowhere was the dropoff more painfully apparent than in the case of Mark Ingram.

The boy from Flint, Michigan garnered just 596 yards this year (although he missed two games to injury), an almost 60% decrease in production from his Heisman Trophy-winning campaign. Last year Ingram had seven 100-yard games (and came one yard from doing so against LSU) in 2010 he was able to surpass 100 yards in just two contests, Duke and Arkansas (although he fell just three yards short of the century mark against, once again, LSU).

The obvious beneficiary of this anemic rushing attack was Julio Jones whose 1,084 yards receiving was almost double his 2009 regular season total. And that was despite having surgery to put a pin in his fractured left hand at the season's halfway point. Tough, you ain't.

What is interesting is that the scoring production of this offense was certainly looks better than the prior two seasons but really wasn't when compared to the field. This year Alabama is 21st in the nation in scoring offense, exactly the same as last year.

Which leads us to ask, how did the Alabama defense fare in comparison with the prior two regular seasons? Well the answer is below but I warn you, if you miss Terrence Cody then this graph might make you weep openly: 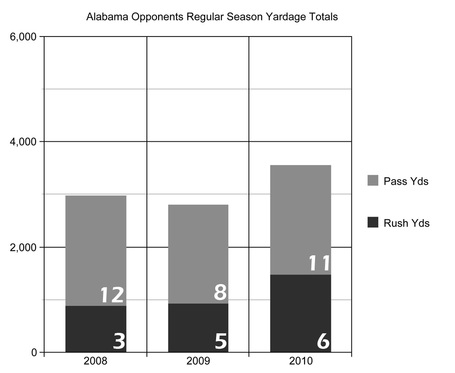 Regular season games only. Touchdowns for each category indicated in white.

As much hand wringing that was done over the green Crimson Tide secondary the real weakness of this defense was the inability to stop the run. Not only did the Alabama defense allow opposing offenses to earn more than 1,000 yards on the ground during the regular season for the first time since 2007 they permitted a whopping 60% more yards than last year. Yeesh.

While the touchdown numbers for 2010 don't seem incredibly out of whack with the past it's worth considering that the difference between an undefeated season and one with three losses is less than three touchdowns. The Crimson Tide's three losses this season were by a total of 18 points and last year's Alabama defense allowed four fewer touchdowns than the 2010 edition. The truth is the margin of error at the top is razor thin. This year Alabama is 5th in the nation in scoring defense, last year the Crimson Tide was third.

Please join us after the jump as we take a gander at a few other statistical categories in a bit more detail...

Clearly, the number of yards alone is of limited value. So lets take a look at the statistic which roughly correlates to the ability to keep drives alive, third down conversions. Overall, Alabama mustered a 43% third down conversion rate in 2010, a good four percentage points better than 2009. Conversely, the Crimson Tide allowed opponents to convert on third down 34% of the time during the regular season, four percentage points worse than 2009.

Here is the tally by game: 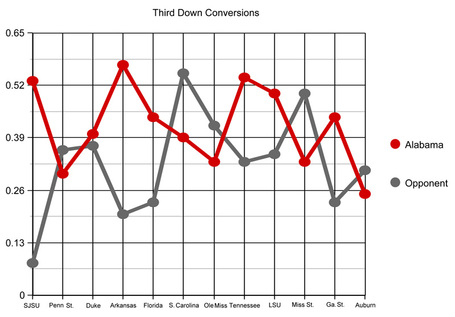 In this context, the woes of the offense are pretty clear. Alabama's productivity peaked with Arkansas and went into a steady decline for the next three weeks. Tennessee offered an opportunity for rejuvenation but outside of the outlier of the Georgia State game, the whole of November saw a continued and increasing malaise in the efficiency of the offense.

While the deep strikes against the Mississippi State secondary put that game in the bag by halftime and gave reason to believe the vertical passing threat problem had been solved, the underlying issues with offensive production came back to haunt us in the Iron Bowl. And don't even talk to me about LSU.

On the defensive side of the ball you see Alabama allowed South Carolina to convert on third down more than half the time. That's not a recipe for success. Interestingly, we were almost as ineffective against Mississippi State but that game never was close. Auburn's vaunted high-octane offense couldn't convert even a third of the time against the Tide but the inability of Alabama to score after the first quarter made that enough to get the win.

The same issues are apparent in the Red Zone numbers for the 2010 regular season. Alabama earned 4.3 points per red zone visit (53 attempts) this year while allowing opponents 3.1 points when they encroached inside the Crimson Tide 20-yard-line (29 attempts). In 2009 Alabama had 4.02 points (59 attempts) and opponents only mustered 2.5 (24 attempts). Game by game, the points/attempt looked like this: 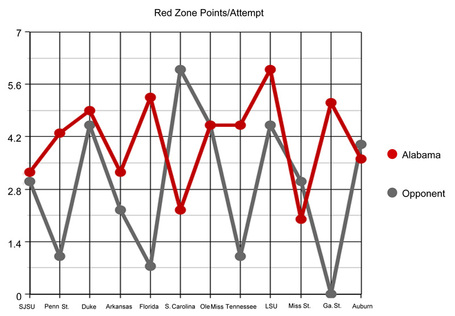 Obviously, the two games that stand out here are South Carolina and LSU. The Gamecocks scored a touchdown each of the four times they entered the red zone. Alabama's four times into the red zone only garnered a touchdown and field goal. The result was predictable when looked at with this metric but the outcome of the LSU game certainly wasn't. The Crimson Tide earned a touchdown each time they got within the LSU 20-yard-line while holding the Bayou Bengals to a point-and-a-half less but still couldn't pull out the win.

Defensively, this is a category where the difference between a three-loss season and perfection is microscopic. The 2010 Crimson Tide defense was sixth in the country for opponent's red zone conversions. Last year's National Championship-winning squad was third.

So while all this might shed a bit of light on one or two points it seems to fall short of offering a smoking gun for what ailed the Crimson Tide in 2010. Perhaps the most reasonable assessment to make from this right now is that this was a pretty good Alabama team but certainly not a great one. More importantly, the the room for improvement dosent seem to be an unfathomable gulf between where this team is at and where their impressive potential suggest they could be.