Alabama Gymnastics: More Awesome Than You May Realize

Share All sharing options for: Alabama Gymnastics: More Awesome Than You May Realize 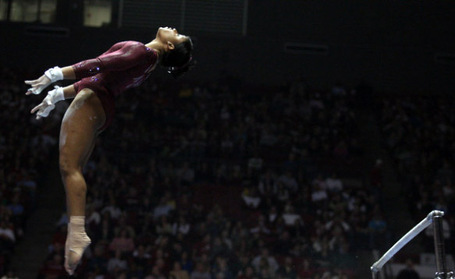 While Alabama already has already claimed one National Championship this year, the women's gymnastics squad is aiming to make it two. Friday evening they will face off against sixth-ranked Florida at Coleman Coliseum with hopes of avenging last season's loss in Gainseville and reclaiming the No. 1 ranking.

At the halfway point of the 2010 season, the Tide gymnasts have made good on the promise from their stellar 2009 campaign. They wrapped up last year with their sixth SEC championship, 24th NCAA regional title and their 27th consecutive NCAA Championship appearance.

The Alabama team remained virtually intact for the 2010 season with the return of seven All-Americans who have combined for no less than 17 career honors. The Tide entered the season ranked No. 3 in the pre-season coaches poll but quickly made it clear their goal was much higher than that.

The 2010 campaign began with the 99th-straight victory over Auburn’s squad. They followed up by defeating five-time defending NCAA Champion Georgia in front of a near-sellout crowd at Coleman Coliseum. (A loss that sent our fellow SB Nation denizens over at Dawg Sports into full scale panic mode.)

A victory over Arkansas on Jan. 22 vaulted Alabama into the No. 1 ranking which they held until stumbling against No. 12 LSU in Baton Rouge last Friday. The most recent rankings have placed them just two-hundredths of a point behind top ranked Oklahoma (who they are scheduled to meet in Norman on March 5). 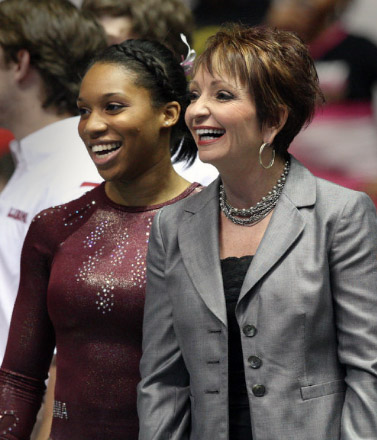 Despite the setback, the Tide remains one of the most formidable squads in the nation. Alabama remains No. 1 in two individual events; the vault and balance beam. They are No. 2 in floor exercise and 10th in the uneven bars.

Individually, the Tide are led by Senior Morgan Dennis who is currently ranked third on the vault, fifth in the all-around, seventh in the balance beam and ninth in floor exercise.

Head Coach Sarah Patterson and her husband, volunteer coach, David Patterson, are in their 32nd season at Alabama. The duo have recorded a 384-88-4 record in that span, amassing six SEC team championships and four NCAA team championships.

Fan support for gymnastics has long been evident at the Capstone. The Tide have averaged more than 11,000 fans per meet over the past six years and hold claim on top-30 single-meet attendance totals in SEC history.

Gymnastics typically boasts one sold out meet each season, hitting that mark last year versus Auburn (which they won). In 2008, they became the first team in collegiate athletics to host two meets with 15,000-plus in attendance. The 15,162 fans that showed up for the meet versus Florida in 2006 set a school and SEC record for attendance.

The matchup against the Florida Gators will be Friday at 7:30 p.m. in Coleman Coliseum and televised on ESPN2.