Share All sharing options for: Stadiums I've Been to: Florida Citrus Bowl 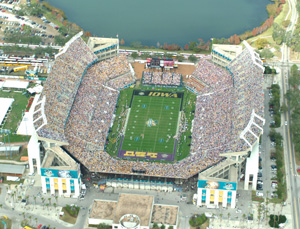 Can't believe I found an aerial photo from the game I went to.

I've actually been to the Citrus Bowl for three very different events (well, three very different college football events.) The Capital One Bowl, the C-USA Championship Game and a regular season UCF game before they built Brighthouse Stadium. I'm going to talk about the experience from the Capital One Bowl though because all of the stories surrounding that game are much more memorable than the others.

*That is the normal capacity. Stadium can be expanded with temporary bleachers.

At the time of this game, I lived a grand total of 5.6 miles from the Citrus Bowl according to Google Maps. So, on New Year's Day 2005, I hopped in the car and went on the hunt for a pair of tickets to the best football game that had occurred in town since I moved to Orlando (UCF vs. West Virginia had previously held the honor.) I was originally going to watch it on TV but I figured if I couldn't get a ticket for cheap, that I could be back on my couch in no time and wouldn't even miss most of the first quarter.

Before the game, all of the scalpers were still trying to get face value for tickets ($70) and I was pretty much like "no way" to all of them given that the place was crawling with tickets. Some people were willing to come down a bit, but I still didn't want to pay $50 for a good seat. I didn't care where I sat, I just wanted to be in the stadium. A few minutes after kickoff, some guy offers me a pair for $70, I countered with a pair for $40 to which he was very dismissive. Knowing I could walk away, I did and he chased me down and let me have a pair for $40. Getting $140 worth of tickets for $40 was a pretty rocking start to the new year.

Our seats were in the LSU section and their fans couldn't have been any nicer. They were having a good time on vacation, I was happy to be outside on New Year's Day in a t-shirt and shorts and didn't care who won. It was shaping up to be a good day. I remember one guy I was sitting next to telling me that if LSU ceased to exist, that he would become a Bama fan on the spot because they were the only other team in the SEC worth a crap. I thought that was pretty gracious of him considering I was wearing a UAB hat to intentionally remind them all of this little gem.

The Stadium itself is kind of a less crappy version of pre-dismantled Legion Field. I didn't think it was too shabby at the time because I'd only been to Legion Field and pre-renovation Bryant-Denny. Some of my subsequent travels have let me know though that it has massive room for improvement and that UCF wanted out of there not only because of size and revenue reasons.

One thing I did like about it though is the escalators to the upper deck like they have in the Georgia Dome. I think that might have been part of their World Cup upgrade, I don't know. Besides that, it's just a bunch of concrete and nothing spectacular architecturally speaking, though the nearby lake is kind of nice. Another thing I do have to give to games there is that they sell beer and a whole host of other not typically seen a college football game type foods. There was a kajillion different vendors selling everything from satay chicken to fire roasted corn. In SEC context, if you aren't going BCS, this is the bowl you want to go to despite the stadium not being as nice as the Georgia Dome or LP Field (I do have to say the Cotton Bowl received a big upgrade in venue last bowl season.) Anyway the plusses of playing in Orlando: big payout, good Big 10 competition, almost guaranteed good weather (this year was a bit of an exception), and it means you probably won at least 9-10 games. Hooray for that some years.

I don't know how many of y'all remember this game, but it turned out to be one of the most exciting fourth quarters I've ever seen. LSU trailed the entire game until there was 46 seconds left. Even when they went down by 12 with just under 13 minutes to go in the game, it never felt out of reach, it was just one of those kinds of games. LSU led in every statistical category: total offense, first downs, forced turnovers, time of possession (they held it over eight minutes longer than the Hawkeyes), less penalties, etc. Despite all of that, they trailed the whole game.

The last two drives of the game accounted for 140 yards of offense by the two teams and two lead changes in the last minute. For those of that don't remember the final play, here it is on the YouTubezzzz.

I really wish you could see the pre-snap formation on the video. I remember when Iowa lined up for the final play that LSU seemed to have no idea that the Hawkeyes had one side overloaded. I pointed out to the horror and dismay of the LSU fan next to me that LSU's coverage didn't compensate for Iowa's formation. Even then, it was still going to have to be a miracle pass....which it was. Even after all of that, an LSU DB still had a shot at Holloway but didn't manage to bring him down. Crazy crazy crazy finish to the game.

I can honestly say in all of my life that I've never seen more emotional swing in such a short amount of time at a game. After trailing the entire game, LSU finally goes ahead with less than a minute to go and then has their legs kicked out from under them three plays later with no time remaining on the clock after a long bomb. It was Nick Saban's turn to be on the wrong side of a "bluegrass miracle" I guess.

That brings me to my last personal little fun fact of the game. I also was at the 2007 Alabama vs. Western Kentucky game which means I was present at Saban's last game at LSU and his first game at Alabama. Probably not a lot of folks can say that.