Tide softball ready to roll in 2010

Share All sharing options for: Tide softball ready to roll in 2010 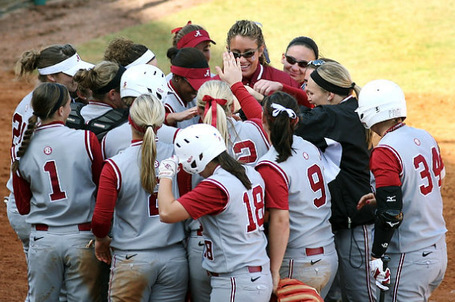 Hello, kids. My name is Wes, and I'll be your softball sherpa this season. I covered softball while being the sports editor at The Gamecock at South Carolina, and covered a 4A state champion in Texas (along with a 1A playoff contender). I also followed three softball teams in Virginia in 2007. I enjoy softball, not the least of which is because I've dated a number of former high school softballers. They tend to be competitive, awesome, quite attractive and can beat your ass if they so choose. Fun and games.

Some of you might remember me from Journalism is for Rockstars, a blog I ran under the pseudonym "Newspaper Hack" from 2005 to 2007. After ending my journalism career in Virginia and moving back to South Carolina, I started a blog called, Columbia: A Sunny Place for Shady People, under the pseudonym "Harden Gervais." Following that, I did a blog on South Carolina politics called, Vierdsonian Democracy under the name "John Vierdsen." In January of 2009, I started up an S.C. politics blog, called Wolfe Reports, under my real name. I did a lot of college football coverage during the fall, though, because like all Tide fans, I have the sickness.

This season, Alabama is set up to make another run at the national championship. Granted, the only teams to win it all for the university are the football and gymnastics teams, and most Tide fans would like the full athletics program to dominate. Bama softball is on that pace. Last year, the Crimson Tide finished No. 3. For 2010, Alabama is the consensus No. 2, behind defending champion Washington. We'd rather not make silly comparisons, but it's hard. Last year, Alabama shocked a lot of teams and pitcher Kelsi Dunne threw two no-hitters to get Bama past Jacksonville State and into the Women's College World Series. Still, Alabama didn't have enough to take home the championship, reminding me of the 2008 football team. Very good, but just not good enough.

This could be the year for Bama to get over and secure the big win. SEC coaches are thinking in a similar vein. Six of 11 coaches picked the Tide to win the conference this year, and elected utility/designated player Charlotte Morgan as a unanimous selection to the preseason All-SEC team. Morgan may well be the best senior softball player in the country. Wednesday, the National Pro Fastpitch draft was held, and she was selected as the No. 1 overall pick. This says a lot about Alabama softball. Morgan is from the West Coast, twinned with Texas as hotbeds of softball talent. If the Tide can keep recruiting players like her from such talent-rich areas, the team will have consistently spectacular runs.

This season, Alabama faces some solid challenges. This weekend, Missouri, a preseason Top 10 team, comes to town to start off the season. And, let's not forget Florida, Georgia, LSU and Tennessee are also considered among the nation's best. The SEC is stacked, and whoever comes out of the conference -- like in football -- will be set up well to play for a chance to win the 2010 national championship.