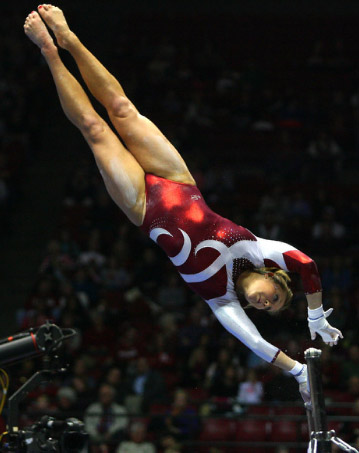 Alabama gymnasts, led by Sophomore Geralen Stack-Eaton bested sixth-ranked Florida Friday night with one of the Tide's most dominant performances this season.

A week after a disappointing conference loss to LSU that dropped Alabama to No. 2 in the national rankings, the Tide rebounded to beat the Gators 197.425-196.600. Alabama now has the top two scores in the nation this season, it's best being the 197.450 earned in a dominating Jan. 22 victory over Arkansas.

Friday's attendance of 12,466 in Coleman Coliseum was not quite a sell-out for the venue but mighty impressive given the snowfall that blanketed the region. Alabama officials chose to go on with the meet since the Florida team had already arrived in Tuscaloosa and snowfall had ceased by the start of the meet.

Stack-Eaton had a stellar evening winning the evening’s all-around at 39.625 after turning in a career-best effort on all four apparatus. Her all-around score was followed by Morgan Dennis (39.45), Ashley Priess (39.45) and Ricki Lebegern (39.40). Florida’s all-arounders, Ashanée Dickerson and Marissa King, turned in totals of 39.35 and 39.125, respectively.

On the vault, Lebegern won the evening’s title at 9.975 and Stack-Eaton was runner-up at 9.925. Stack-Eaton, Kayla Hoffman and Kassi Price each earned 9.875 on the bars to sweep the top three spots in the final standings.

Priess earned the meet title on the beam with a 9.95 and Stack-Eaton was second with 9.90. Alabama swept the floor performance with Dennis' 9.975 earning the title and Stack-Eaton and Lebegern both tallying 9.925 to share second.

The final team standings from the meet were as follows:

Alabama will be at home again next Friday facing No. 21 Arizona for the Tide's sixth annual "Power of Pink" meet. The Florida meet will air tape-delayed on ESPN2 on Feb. 21 at 11:30 a.m.