If there's snow on the field, play ball

Share All sharing options for: If there's snow on the field, play ball 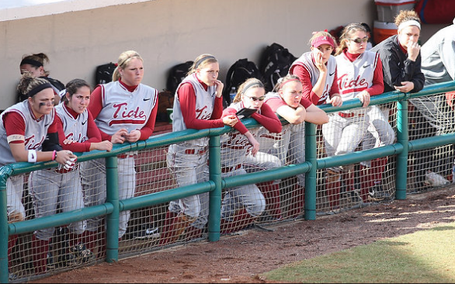 Welcome to softball season, boys and girls. After an unusual snowstorm, no less. A lot of places across the South, a lot of high school teams, postponed games because of Snowtorious B.I.G. That's not true with Alabama athletics, which are going on as planned. That's why Tide softball will still take the field at 1 p.m. today against the No. 9 Missouri Tigers.

Bama is 3-2 all-time against the Tigers, with the last wins coming in the 2008 Tuscaloosa Super Regional. You have to go back to 2005 for Missouri's last win against the Tide. That's understandable, since the team's last appearance in the Women's College World Series before last season was 1994. To put that in context: Tom Foley was Speaker of the House, Jay Barker and Sherman Williams started for Alabama football, and I was in sixth grade.

Entering the Series unranked, Missouri exited early, losing to Arizona State 7-3 and Georgia 5-2. The Tigers were good enough, however, to play host and win their regional and take out UCLA in the super regional. The resurgence of the Missouri program last year was aided by two players: outfielder Rhea Taylor and pitcher Chelsea Thomas. Taylor, a Georgia native, hit .404 last year and led the Big XII in stolen bases. Thomas is considered one of the best in the country at her position, putting up a 1.65 earned run average in 2009.

Of course, Tide pitcher Kelsi Dunne had a 1.63 ERA and Charlotte Morgan posted a 1.80 ERA, so Alabama compares well with the best of what the black and gold have to offer. Last season, Bama only lost one game at home, so if you make your way to the softball complex this afternoon, your expectations of a win should be pretty good.

In all, 15 players return this season for Mizzou, including six starters and three pitchers. The Tigers are slated to be second in the Big XII this year, behind Oklahoma.