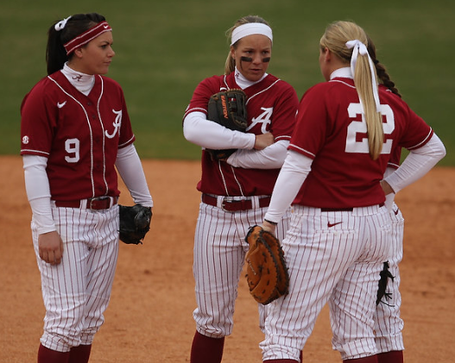 It's hard to necessarily call it a stumble out of the game, but Alabama softball (1-2) dropped two of its three games against the visiting No. 9 Missouri Tigers (2-1). No matter the level of the competition, the Crimson Tide only lost once at home last season. Coach Patrick Murphy has mentioned that this is a different sort of team than the last ones -- it's more reliant on younger players moving on up. In that way, a close loss, a blowout win and a blowout loss could actually be considered a good showing. In any sport, having talented but young players, and immediately going into a tough game, can be a crapshoot.

What's more important here is that the players got experience without completely collapsing. So, that's essentially what ge got out of the series -- taking one of three against one of the best teams in the country. Hopefully, this year's lineup can look at mistakes they made, examine on what worked well and play like a team that deserves to be in the Women's College World Series championship. Game-by-game breakdown after the jump.

The game started out like two great pitchers having at each other, and nobody was gettig much of anywhere. Bama's Kelci Dunne had five strikeouts in 2.1 innings before giving up her first hit, a single by left fielder Jaydee Young. She stole second, and a single by centerfielder Rhea Taylor put the first runs on the board. Once the Tide got out of the inning, things returned to normal -- strikeouts for Mizzou batters while Bama took the occasional walk. In the bottom of the sixth, with events looking bad for the cold Tide bats, UA second baseman Kayla Braud singled with an out. A walk, and a single by rightfielder Cassie Reilly-Boccia put Braud across the plate.

It's 1-1, Dunne's in the circle, with one inning left. Smart money was on the game going into extras. If only that was the case. Two outs -- let's get ready to go. And, bollocks. Tiger third baseman Nicole Hudson took it over the wall for the final run of the game. Alabama couldn't answer, going 1-2-3 to close it out.

This was an offense problem, pure and simple. When you have one, if not the, best pitcher in the country giving you seven innings with two runs, five hits, 12 strike outs and no walks, you have the defensive situation nailed down. Nobody ever complained about having a 2.00 ERA. What is a problem is reaching base without the bats to get the runner home. Alabama was given five walks and two hits -- that's seven runners on base. More than Missouri, which had five baserunners. There has to be a way to get some points on the board.

"It would have been really nice to get that win, but you’ve got to give credit to [MU pitcher Chelsa Thomas]," Murphy said to The Tuscaloosa News. "The first game you’re facing somebody that’s throwing 67 mph, 68 maybe, it’s tough."

And now for something completely different. The Tigers never had a chance. Charlotte Morgan set up in the circle for this one, allowing only three hits while striking out 10, walking one and hitting a batter. Morgan simply shut down Missouri. Mizzou starter Kristin Nottelmann was not so lucky. She was out on the field through the second inning, but the damage had been done in the first when Alabama put six runs on the board to start it out.

Morgan made Nottelmann's day very bad, just to begin, by doubling to center, scoring Braud and centerfielder Jennifer Fenton. Reilly-Boccia came through again, hitting a two-run homer. Not wanting to be left out of the party, first baseman Amanda Locke and third baseman Courtney Conley also teed off on Nottelmann.

The fourth inning had the same mixture of singles, walks and defensive mistakes to get Bama on the board again. Shortstop Whitney Larsen reached on an error, which allowed Braud to score again. A double by Locke produced another RBI, and pinch hitter Alex Blewitt hit a sacrifice fly to score the last run.

"In the second game we had one senior, one junior and seven underclassmen and its going to be a work in progress," Murphy said in a statement. "There are going to be a lot of new people and a lot of new faces the whole time. We could have been pouting after game one but I liked how we came back and put those six runs up early. It was a really good statement."

Turnabout is fair play as the Crimson Tide was on the wrong end of a 9-0 run-ruled game. Considering that Dunne and Morgan limited the Tigers to two runs in 12 innings. Sunday, they combined to give up eight runs on six hits. You can fairly well predict from the other side of the scoreline -- Alabama had no runs on two hits and three errors. Those errors led to two unearned runs. Such a meltdown is staggering.

It had a bad feel from the very start, as an error, walk and a hit-by-pitch loaded the bases. Not one hit, and Dunne is already behind the eight-ball. A strikeout later, a double put the first two runs up, and Missouri added another run before the close of the first. Dunne lasted two more innings before being replaced by Morgan following a double at the beginning of the fourth inning. Morgan couldn't get an out.. She gave up four runs on two hits,with two walks.

Lauren Sewell tried to salvage the operation, and closed out the game by pitching the last two innings, allowing two hits and one unearned run.

"It was a disappointing day all the way around," Murphy said in a statement. "I was disappointed that no adjustments were made. They did everything right and we did everything wrong. We just needed to find a way to come back but we couldn't get anything going offensively. We just have to put it behind us and get ready to play on Tuesday.

Not much time to think with the season in full swing. The Crimson Tide invites South Alabama to town on Tuesday, It starts at 4 p.m. Central, and we'll have a preview up on Monday. Friday, Alabama travels to Deland, Fla. for a tournament hosted by Stetson University. Hats, cologne recommended for gentlemen. Along with Bama and Stetson, Rhode Island and Ohio State are in the mix. The Tide gets Rhode Island first, then Ohio State as the second half of the doubleheader. Saturday features another meeting with Ohio State, followed by Stetson. The championship game will be Sunday morning.