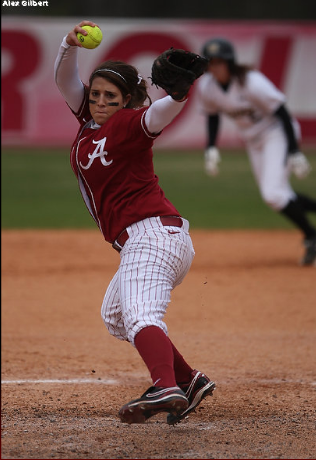 Alabama softball gets a one-off against South Alabama in Tuscaloosa on Tuesday. The in-state matchup provides an opportunity for the Crimson Tide to bounce back from a Sunday throttling by Missouri, and a chance to regain some confidence.

The Jaguars (Hey -- remember when UAB and USA were huge rivals in the Sun Belt in men's basketball? No? Eh.) roll into town with a 2-1 record from the Mardi Gras Invitational in Mobile. The games were slightly delayed because of the snow, but when the teams hit the field again, South Alabama took its first game against Central Arkansas, 6-4. The Jags beat Lipscomb early Sunday afternoon, then lost to Samford in the late game, 11-2.

To give a quick rundown on the program, USA softball is in its fourth season of existence. Coming into this season, the Jags had an overall record of 85-82-1, and posted a 27-28-1 mark last season, finishing 10-12 for sixth place in the Sun Belt. Coach Becky Clark, an alumna of the University of Mobile, helped establish the program after buiding a winner at Mobile. In her final season there, she led the team to a fourth-place finish in the NAIA Tournament.

Before the season, Sun Belt coaches selected South Alabama to take seventh place in the nine-team league, ahead of UL-Monroe and Middle Tennessee. UL-Lafayette is expected to take home the conference crown, and last year was the strongest team in the SBC. However, the Jaguars did take one from the Ragin' Cajuns in an upset in 2009, so this young program is able to produce some surprises. UL-Lafayette predictably filled the preseason all-conference team and player-of-the-year selections, while USA was shut out. But, that's preseason and this is the real thing.

In 2009, designated player Tara Donaldson, who transferred from Auburn, and pitcher Beth Pilgrim made it on the all-conference team, but Donaldson has since moved on. It's definitely a spot South Alabama will have to address as the season goes along, since she started all 56 games and led the team with a .346 batting average. Pilgrim led the pitchers last season, posting a 1.29 ERA and a 17-14 record. She started 31 games and appeared in another 13. Like Alabama, USA hasn't been shy about heading out West to take what it can get from the deep roster spots out there. If Texas and Florida are the motherlodes of college football, the Southwest and West Coast -- especially Arizona and California, are that for college softball.

And here's a fun fact: the Jags have a junior shortstop from Ecuador, Carolina Mendoza. She was athlete of the year at her high school, all four years, and played five years on the Ecuador national team. She also played soccer, volleyball and ran track in high school before arriving at South Alabama. Mendoza started in 52 of 54 games played in 2009, hitting .277.

In addition to Alabama, the Jags have scheduled Auburn and Baylor, and will travel to invitationals hosted by LSU and Georgia. It's pretty clear that Clark isn't interested in having a middle-of-the-road program for years. She's following the old method of playing tough teams and major programs for the long-term benefit of becoming a consistently strong program.

The Crimson Tide and South Alabama will square off Tuesday at 4 p.m. at the softball stadium.