If We Have to Give One BCS Conference the Boot...

Share All sharing options for: If We Have to Give One BCS Conference the Boot...

In all of the recent talk about the Pac 10 expanding and the Big 10 expanding, it seem as if the talk of the Mountain West potentially getting an automatic BCS bid has gotten lost in the shuffle. Before all of the talk of the expansion of current BCS conferences, some people seemed to think the Mountain West was going to expand to 12 teams, with Boise State being the team that really sweetened the deal.

The line of thinking is that the MWC goes to the two division format and that it would push them into automatic bid territory given the strength of Utah, BYU, TCU and Boise State. Personally, I'd have no problem with that. Utah and Boise State have proven they can win the big game and BYU and TCU are certainly no pushovers and both have some pretty solid wins over BCS competition in the last few years.

Mountain West teams like Utah and BYU are among those in discussion to make the leap to the Pac 10, but it's all just speculation at this point. Let's just pretend for a minute that the Big 10 and Pac 10 aren't expanding anytime soon. While I think the BCS would be fine with seven automatic bids and three at large spots, plenty of people think one of the current six BCS conferences will have to go on the chopping block in order for the Mountain West to get their shot at an automataic qualifier. It seems as if there is nearly universal accord on which conference should get axed...and that's the Big East. I can't really figure out why though. As a conference, they've gone 6-6 in BCS Bowls with the following track record: 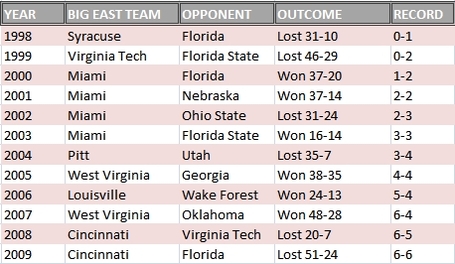 Because of conference realignments, five out of the Big East's twelve BCS appearances were from teams that are no longer in the conference (Miami and Virginia Tech.) When you subtract those five appearances, the Big East goes from having a 6-6 (.500) record to having a 3-4 (.429) record. Not stellar by any means, but just one win below .500.

Compare that to the ACC. In twelve appearances, they've managed a 2-10 record. Let that sink in for a minute. 2-10 (.167). Even if you remove five of the Big East's BCS appearances because of those teams no longer being in the conference, they still have more wins in seven attempts than the ACC does in twelve attempts. Here are the appearances of ACC teams in BCS Bowls 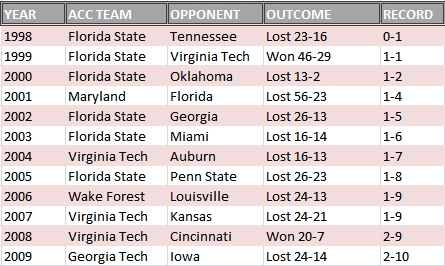 Do people overlook the horrible performance of ACC teams because of the presence of former powerhouses Florida State and Miami? Or maybe because the names Georgia Tech and Virginia Tech carry more recent historical weight than those of many Big East teams?

The more I look at it, it seems preposterous to me that many want to deny the potentially expanded MWC an automatic bid when one of the current BCS conferences is performing incredibly poorly in the post season when competing against the best college football has to offer. The MWC and WAC are a combined 4-2 in BCS bowls (two more wins than the ACC in six less attempts) and considering the MWC and WAC teams were pitted against one another this year, the statistic is a bit skewed for the non-automatic qualifiers.

The way I see it, expand the BCS to seven conferences getting automatic bids or if you have to kick out one of the current participants, don't kick out the one that wins half the time, give the boot to the perennial underachievers.