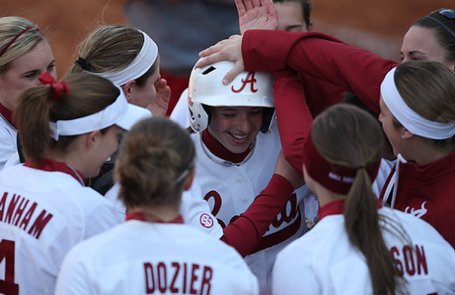 If you had any expectations that the 2010 vintage of Alabama softball would be like the past couple years, Tuesday may have gone a long way to changing those hopes. This is a young team, and plays like a young team. Yes, South Alabama has talent and can hang with the best, but this was out of control.

"We know what a good program this is," USA coach Becky Clark said to The Press-Register. "You want to play the best, and you want to beat the best. That's why we're here. So it's very disappointing to get that close and not be able to finish it."

For the first three and a half innings, the game was deadlocked at 0-0. That simply would not have happened with last season's Crimson Tide squad. Not against a team like South Alabama. But this is a different year and a different Alabama.

As we talked about mid-game, the Tide has incredible pitching. Really, Bama kicks ass in the circle. The bats, though, they are as cold as the air temperature. Fortunately, in the bottom of the fourth inning, there was a change for the better. Catcher Kendall Dawson singled, and was pinch run by Jennifer Fenton, who stole second. It ended up not mattering -- third baseman Alex Blewitt rocketed a ball over the left field wall to put Alabama up 2-0.

That lead didn't last long. The first batter struck out, as did the second. Unfortunately, a passed ball allowed designated player Stephanie Dunaway to reach first. She was shortly accompanied by South Alabama second baseman Brittany Fowler, who took her base on a walk. Then it went pear-shaped. Crimson Tide pitcher Amanda Locke gave up a two-run RBI double to Jaguars centerfielder Britany Campbell, deadlocking the game at two a piece. It really began to look desperate for Alabama in the top of the sixth.

Hey, going into extra innings against an overmatched opponent isn't something to be scared of, but being down toward the end of a game is something to be concerned about. Leading off, USA rightfielder Haley Hopkins launched the ball out of the increasingly-frigid softball complex and put the Tide in a bad position. However, there is a reason that Alabama is in the Top 10 nationally. With one out, leftfielder Jazlyn Lunceford doubled, then scored on a single by second baseman Cat Dozier to tie up the game. A strikeout by pinch hitter Courtney Conley made it look like extras were definitely in the cards, but, thankfully, it was not to be.

Shortstop Whitney Larsen damn near ripped the leather off the ball, sending it over the fence in centerfield and bringing in herself and Dozier to secure the win. First baseman Charlotte Morgan doubled to score pinch runner Kayla Braud to come in with the final score. The win brings Alabama back to .500 before heading to Florida this weekend. There are things to be happy about, and others to be concerned about, after the past four games. The good news is that Crimson Tide pitching is boss, to put it mildly. The Tide is rocking it when it comes to hurlers in the circle. Hitting, not so much. Bama's youth is really showing itself with the cold bats. If Alabama is going to make a deep run in the Women's College World Series this year, the offense is going to have to get it together.

"I was really proud of the way we came back," Alabama coach Patrick Murphy said in a statement. "We were able to take advantage of the opportunities that were presented to us. Overall I thought it was a good night."

The win went to Lauren Sewell, who came in to spell Locke in the sixth inning. Sure, it didn't go perfect for Locke, but it looked like both her and Sewell did a good job at keeping South Alabama under control while letting Morgan and Kelsi Dunne rest their arms. Locke went five innings, giving up three runs on five hits while striking out eight. In her two innings, Sewell let go one hit, no runs and struck out four.

The Crimson Tide next take the field against Rhode Island at 10 a.m. Central in Deland, Fla. in the Stetson Tournament.

Photo: Outfielder Cassie Reilly-Boccia is congratulated after an RBI single on Feb. 13 versus Missouri.