Top Moments of the 2009 Season: The Sweet Sixteen - Anders vs Javy

Share All sharing options for: Top Moments of the 2009 Season: The Sweet Sixteen - Anders vs Javy

No shock yesterday as Rocky Block downs the Chest Bump with 93% of the vote to make the Elite Eight. Personally, I voted for the Chest Bump. I know my logic is a little off on this, but beating Tennessee (at least in my mind) was a foregone conclusion after we held them to a field goal attempt. If you can block one, you can block two, right? Especially when their kicker has a pulled hamstring and is getting zero height on his kicks. But the Chest Bump? That was nothing but an expression of pure joy and satisfaction over a job well done from a man our rivals like to bash for being an emotionless robot. Yeah, Rocky Block was more important, but if we're really going to follow the "which made you happier?" question to the letter I had to go with Ingram and Saban. Anyway, today we've got two take aways: Eryk Anders' decisive forced fumble against Texas and Javy's physical INT at Ole Miss. Vote away: 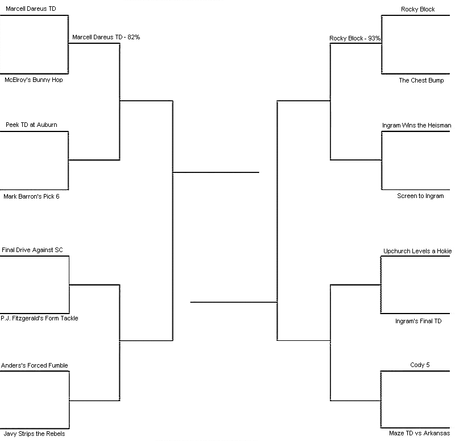