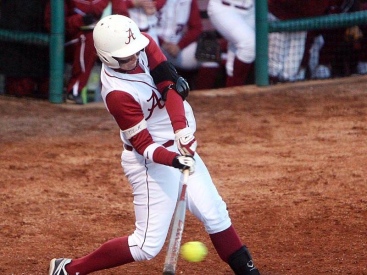 If it's the early part of the season, that means invitationals galore. This weekend, Alabama softball will be participating at the Hatter Invitational at Stetson University in Deland, Fla. On Friday, the Crimson Tide have an early slate, playing Rhode Island at 10 a.m. Central and Ohio State at 12:30 p.m. Central.

The team from the Atlantic-10 with the pale blue and white unis come into this tournament trying to turn things around after a sub-par showing last season. The game against Alabama will be Rhode Island's first since losing to LaSalle to close out a 14-37 year. It was Coach Erin Layton's first in Kingston, and she'll no doubt be taking pains to get the team back up to par this year.

Unfortunately for the Rams, there's not much tradition to draw from, or recent success. The program started up in 1978, hasn't been to the NCAA Tournament in 27 years and does not have a tourney win. The good news for Rhody is that it's bringing back four of its top six sluggers from last season, and its most successful pitcher from 2009 will also suit up for the 2010 campaign. Sophomore shortstop Courtney Prendergastt led all batters in '09, hitting .289, starting in 40 of 44 games played. She tallied up 33 hits, three home runs and 15 RBI.

Pitcher Alison Hartzell was the arm the Rams leaned on most in 2009, tallying 126.2 innings pitched, leading the team with a 3.09 ERA and sporting a 10-10 record. It would be easy to say Alabama will destroy Rhode Island, but as we've already seen this season, you should assume nothing about the Tide, except that it has the talent to win it all and the youth to not get there. For what it's worth, Hartzell and Prendergastt were freshmen last year. So was Brittany Julich, who was second only to Prendergastt in batting average. Bama should win this game, but you shouldn't count out the Rams.

The Crimson Tide gets the Buckeyes Friday, but also at 10 a.m. on Saturday. In stark contrast to Rhode Island, OSU is ranked in the Top 15 and is 4-1 so far this season. The Buckeyes dropped their opening game to Houston, 1-0, at the Houston Hobby Classic. Following that, Ohio State finished the Classic by taking out Sam Houston by 6-0, beating Baylor 4-3, shutting out Louisville 2-0 and knocking off Kansas 4-2. With the exception of the Same Houston game, the Buckeyes haven't exactly blown out the lights on the scoreboard, but their pitching is damn good.

The team has a collective 0.79 ERA over the first five games. OSU opponents have a combined 4.09 ERA over the same period. Those are some truly sobering numbers. Three players sport a .500 batting average -- catcher Sam Marder (5-for-10), outfielder Leah Ledford (4-for-8) and pitcher/outfielder Karissa Medrano (2-for-4). Very roughly, over five games, Ohio State is averaging a win of 4-1. Not too shabby. It's been about four years since these teams last saw each other. Then -- March 3, 2006, the Buckeyes beat Alabama 3-1 in the Hampton Inn Crimson Classic (by the way, we totally endorse the Tuscaloosa Hampton Inn -- it ain't bad).

Also, OSU isn't exactly expecting the Rust Belt to produce championship-level players. Ohio State has 10 players from California on its roster, seven players from Ohio and one each from New Mexico and Indiana. Last year, the Buckeyes went 47-11, taking second place in the Big Ten and making it to a Super Regional for the first time in the program's history. This looks like a program on the rise, and Bama will get its money's worth from those group of poisonous nuts.

For all appearances, Friday's going to give the Tide a night-and-day showing, as far as talent, potential and success are concerned. Hopefully, Bama won't come out slow against Rhode Island, and will exit the dugout guns blazing versus Ohio State.