Softball: Today was a good day (Part One)

Share All sharing options for: Softball: Today was a good day (Part One) 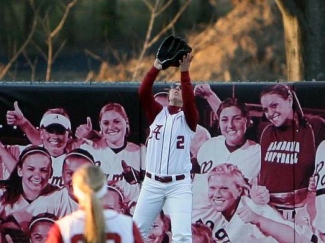 Because of the absurd amount of scoring in the first half of Friday's doubleheader, the game versus Ohio State will be covered in a subsequent post. Enjoy!

There was presumably no barking from the dog, and no smog, in Deland, Fla. on Friday morning as Alabama won its first doubleheader in the Hatter Invitational at Stetson University. The good news that can be taken out of the games is what was expected, happened. That's not to say everything was perfect -- is ever without a problem here or there. But at the end, you want the score to be in the right direction, and that's how the day came to a close.

It would be nice to say that Alex Blewitt scored two touchdowns and Cassie Reilly-Boccia added a field goal, but until we finally get women's football as an NCAA-sanctioned sport, interesting scorelines will have to do.

The Rams were not prepared, not ready and simply could not keep up with the Crimson Tide. Maybe if Rhode Island had a few more games before arriving in the invitational, the game could have been more competitive. As it was, Bama took apart URI.

Eight out of the 12 Tide players who stepped to the plate registered a hit, and six of those players had multiple hits. First baseman Reilly-Boccia and third baseman Blewitt each had three. There were three home runs, and Blewitt led the team with six RBI. That's the good news.

The bad news, as much as it is, is that the Tide committed four errors and gave up runs to the Rams in consecutive innings. Each run scored was unearned, contributed to by errors. So, Amanda Locke, who went three innings, giving up four hits, one walk and striking out two, had a 0.00 ERA. Statistics, eh?

The game started out with a trend that would hold true throughout -- Alabama getting in scoring position, and Rhode Island wasn't able to handle it. Centerfielder Jennifer Fenton reached on a walk, stole second, then advanced to third on a throwing error by the catcher. One out later, designated player Charlotte Morgan drove in Fenton when she reached on an error by the shortstop. So, in quick order, the Rams had two errors and Bama was on the board. Lisa Elizondo was put in to pinch run for Morgan, but her speed wasn't needed as Blewitt sent a home run over the wall in right-center.

In the bottom of the first inning, three defensive miscures by Bama allowed Rhode Island leftfielder Jackie Kampmeier to score the Rams' first run. First, she reached on an error by Reilly-Boccia, advanced to second on an error by catcher Olivia Gibson and made it to third after a pop-out. A subsequent passed ball gave Kampmeier the chance to cross the plate. Otherwise, the Tide held tight and moved on to the second.

Gibson quickly redeemed herself with a solo shot to center to lead off. Rightfielder Keima Davis followed that up with a double, and moved to third when second baseman Kayla Braud bunted to take first. Braud stole second, and Davis scored when the URI catcher made another throwing error, which also allowed Braud to advance. By that time, the flood gates were open. Fenton hit a sacrifice fiy to score Braud, and Reilly-Boccia received her first hit of the game, sending a single through the infield. She moved to third on a single by Morgan and scored on a ground-out by Blewitt.

At this point, anybody who has spent time as a pitcher, from rec leagues to the professional ranks, had to be feeling for Rhode Island starter Erika Szymanski. She had pitched 1.2 innings, and couldn't catch a break, already seeing seven runs on the board and witnessing one mistake after another by her teammates while seemingly throwing gasoline on the fire, herself. It takes some will and self-confidence to stay out there on the field and keep giving it your best. And it wasn't over. Morgan notched a run when leftfielder Jessica Smith doubled, and Bama got its last run of the inning courtesy of a double by Gibson.

Mercifully for the Rams, the top of the second soon came to a close, and they had a chance to try to make up a little of the 9-1 deficit they were facing. Again, the leadoff hitter, this time catcher Nicole Massoni, reached on an error. She was replaced by pinch runner Alison Hartzell. She moved to second on a walk, then stole third. A sacrifice fly by third baseman Kelly Coker gave Rhode Island its second run of the game and the only one of the inning. As the third inning started, Szymanski had a chance to recover some amount of composure and put in a solid frame.

It almost looked possible that Rhody would get out of the inning without giving up another run. Alabama went down two outs to start, but three consecutive singles -- Reilly-Boccia, Morgan and Blewitt -- and the Tide are back up on the board with run No. 10. URI was able to get the third out without another Bama score, and that marked the end of the day for Szymanski. She finished with three innings pitched, nine earned runs on 11 hits, one strikeout and two walks. She had 83 pitches in her outing, while Alabama's pitchers combined for 82 for the entire game.

The last significant offensive performance for the Rams came in the bottom of the third with their final run. Shortstop/pitcher Amanda Sbei, second up to the plate, singled and reached second on an error. Locke gave up two more singles, the second of which was an RBI by designated player Melissa Wilson. Locke was done for the day as well, giving up no earned runs, and four hits.

Super-frosh Lauren Sewell came on in relief for the Tide, and that was all she wrote for the Rhode Island bats. Sewell was dominant in the circle, allowing no runs, one hit, striking out one and walking two in the fourth and fifth innings. But Bama's offense was acting like a Toyota possessed, with the accelerator floored and no stopping it. The next victim -- Sbei, the last person to score for the Rams.

At this point, UA coach Patrick Murphy started playing around with his lineup, as coaches tend to do when the game starts getting out of hand. As an aside, if you've ever had to follow such things on a scorecard, and it's your job, as it has been mine, you start thinking horrible things about the coach. This person goes here, this person goes there, this position is subbed for the third time, and the pinch runners, pinch hitters and and dammit -- there's not enough space on the card. You need a school-sized whiteboard to handle that.

In that vein, with a 10-1 score, the game being out of hand and substitutions going willy-nilly, the rest of this post will be truncated for the fourth and fifth innings. Hopefully, nobody feels cheated or slighted.

As you've undoubtedly noticed, the early-season posts for softball this season have been changing with practically every effort. It's not inconsistency -- it's an attempt to do a better job each time out. Much like a freshman taking the field, I'm getting used to the SBN platform and making the coverage as good as it can possibly be. Just be patient, and within a few more games, this thing will be nailed down for the rest of the season.