Share All sharing options for: Softball: Today was a good day (Part Two) 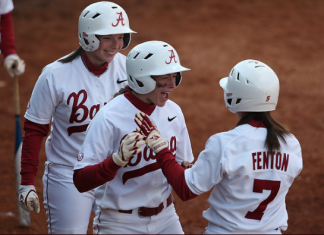 Granted, it's now tomorrow, but when two teams combine for 20 runs, you end up typing away for four hours. Still, Friday was a good day. Let's get into the second half of the doubleheader.

After Alabama gave a thorough thrashing to Rhode Island in the first half of Friday's doubleheader in the Hatter Invitational, the Crimson Tide had a short time to rest, refocus and get ready to take on No. 14 Ohio State. The Buckeyes, entering the game at 4-1, were not to be overlooked. If Bama learned anything from the opening season series with Missouri, this was the time to show it. And, the Tide did.

For those who were fans of "Chappelle's Show," let's posit this: Ohio State and the Wu-Tang Clan have something in common. Just so you know, this gentleman curses like a sailor, so if you don't get the reference, the video clip is out on the Internet somewhere. Regardless, the point being, Bama couldn't just sit back, make contact and expect to win because of miscues by the opposition. The Tide had to come out focused and ready to take on one of the nation's best.

Tide coach Patrick Murphy is not a foolish person, and he made sure to hold star pitcher Kelsi Dunne for the tussle with OSU. She was in the circle at the outset of the game, as Alabama was the nominal home team. Dunne and the Bama defense locked it down quickly, with a Buckeye flying out, one popping out, one striking out and one player walking. Of course the Tide didn't do much better in the bottom of the first inning. The squads went into the second with no runs, hits or errors.

That took a turn in the second. So far this season, it seems like that when Dunne makes a mistake, she makes it big. It's my experience that coaches don't mind a player being aggressive and successful 90 percent of the time. The remaining 10 percent that doesn't work out is just the price of admission. With that in mind, OSU second baseman Whitney Cooper led off the second inning with a solo home run, putting the Buckeyes in the lead for the first time. Bama ended up getting out of the inning by forcing a couple groundouts and a strikeout. Both teams went 1-2-3 in the third before things got interesting again in the fourth.

Still up 1-0, Ohio State came up in the top of the fourth and put a player in scoring position, but another strikeout closed out the inning and the Tide came up ready to tie it up. Alabama did better than that. Centerfielder Jennifer Fenton grounded out to lead off, but rightfielder Cassie Reilly-Boccia doubled to right-centerfield to put Alabama in scoring position with a reasonable chance to do so. First baseman Charlotte Morgan didn't go for an RBI single, however. She knocked the ball over the fence in left-centerfield as the Tide went up 2-1. Bama didn't improve on that, finishing the inning with two singles and two strikeouts.

The lead was short-lived. Centerfielder Dee Dee Hillman reached first with a lead-off bunt, and the Buckeyes pulled their impression of the fourth inning Tide when catcher Sam Marder came up and blasted a home run, giving Ohio State the lead at 3-2. Bama got out of the inning, but the interesting undercurrent of the game was established. Dunne was doing a great job, except for two pitches that went where they weren't supposed to go.

Alabama went 1-2-3 on strikeouts in the bottom of the fifth, but managed to move into the bottom of the sixth without allowing Ohio State's two baserunners to score in the top of the inning. Reilly-Boccia started the sixth by grounding out, then Morgan struck out. But, it wan't to a do-or-die seventh just yet. Shortstop Whitney Larsen drew a walk, and third baseman Alex Blewitt singled, and Lisa Elizondo came on to pinch run for Blewitt while Courtney Conley pinch hit for designated player Amanda Locke. Conley walked, loading the bases. That's when it happened -- after Melanie Nichols entered the circle in relief for starter Lindsay Bodeker, leftfielder Jazlyn Lunceford became an early hero of the season with a three-RBI double to give Alabama its winning margin, 5-3.

This is a big win for the Crimson Tide. Ohio State is no pushover, and this sort of win in this sort of game against this sort of team is exactly what a lot of Bama fans were hoping for by the 2010 vintage of the Alabama softball team. Another bit of good news is that Dunne went the entire seven innings, giving up three earned runs on seven hits while striking out nine and walking three. She had two bad pitches in a matchup versus a team likely to make it to a Super Regional at least, and the Women's College World Series at best. All in all, Alabama is in good shape going into Saturday's games.

A preview of Stetson would normally be coming up, but the nature of the Friday doubleheader has ruled that impossible. Let's just assume that the early game against Ohio State will be tough and the game against the host team Stetson, later in the afternoon, will be markedly easier. If everything goes according to plan, Alabama will be 6-2 going into the Hatter Invitational championship game on Sunday at 11:30 a.m. Central. Fingers crossed.