Softball: Another tough win for the Tide

Share All sharing options for: Softball: Another tough win for the Tide 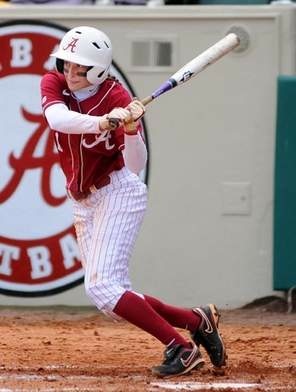 It finally feels like Spring in the South, and No. 8 Alabama (5-2) looks like it is finally getting into the groove. As expected, the game against No. 14 Ohio State (5-3) was not a walk in the park. It was tough. It was rough. It was what was expected going into the second game of the Hatter Invitational versus a team that matches up perfectly to give the Crimson Tide fits. Fortunately, the early game on Saturday finished with the right result.

Charlotte Morgan, the all-everything player for Bama, was the starting pitcher against the Buckeyes on Saturday, facing off against Melanie Nichols, who Alabama saw for a short time at the close of Friday's win against OSU. Both pitchers gave it their all, which meant that the batters had to bring it.

Neither team could do anything in the first inning, and Morgan was able to keep the Buckeyes off the board in the second. Bama struck first, however. With two outs, third baseman Courtney Conley reached first on an error and then moved on to second. Second baseman Kayla Braud followed that up with a single to left, and gave the Tide its first lead of the game. However, there's something about Ohio State that jacks its players up to make a quick comeback.

It happened on Friday, and it happened again today. Immediately after Alabama took a 1-0 lead, OSU came back and scored three in the top of the third. Leftfielder Vanessa Spears singled with one out, as did centerfielder Dee Dee Hillman. Catcher Sam Marder, once again proving herself as one of the best hitters for Ohio State, singled and advanced to second, sending in Spears to tie the game. Katie Simonton came on to run for Marder, and scored along with Hillman when an error allowed designated player Courtney Pruner to make it to second base.

But, oh, turnabout is fair play, mädchen. The action kicked off when rightfielder Cassie Reilly-Boccia singled and took third when Morgan hit a double to right-centerfield. One out, runners on second and third. The plate was set, as it were. Shortstop Whitney Larsen followed that up with a single and notched an RBI, putting Morgan on third. With runners on the corners, designated player Alex Blewitt scored Morgan while reaching on a fielder's choice, as Larsen was tagged out at second. That did it for the Tide, and the fourth inning gave the Buckeyes another chance to hit back.

With two outs and a runner on first, it could have been OK, but it never is. After Spears lined out, Hillman doubled to right, which sent rightfielder Leah Ledford across the plate to break the deadlock. Bama could not answer in the bottom of the inning, getting one hit on a bunt by Conley, but not much else. Fortunately, Ohio State couldn't do anything in the fifth, when Kelsi Dunne subbed Morgan, so that allowed Alabama a chance to wake up its bats and rally. And the Tide did rally.

Reilly-Boccia wasted no time by nailing a home run to right field, tying the game again. At that point, Megan Miller came on in relief for Nichols. She subsequently gave up two walks, but got her first out when Blewitt reached on a fielder's choice and Morgan was called out at third. After a wild pitch, Blewitt moved on to second and Larsen set up at third base. UA coach Patrick Murphy started getting his late-game strategy going, pinch running Cat Dozier for Blewitt. A fielder's choice ended up killing Larsen's chances to score, and OSU brought on Lindsay Bodeker to finish the game. It didn't stop the game-winning hit. Yet again, leftfielder Jazlyn Lunceford won the day, knocking a single through the infield that drove in Dozier to make the difference. Somebody build Lunceford a bronze statue -- she's clutch like Robert Horry.