Share All sharing options for: Softball: Bama slides by Stetson in one-hitter 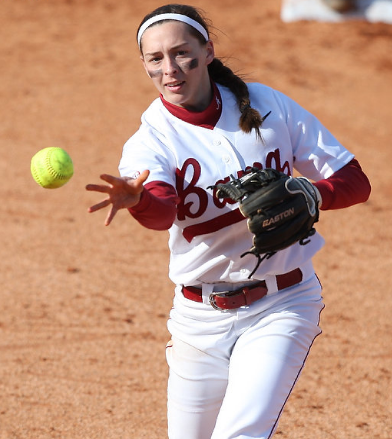 Maybe it was the inclusion of younger players in the lineup. Maybe it was because Alabama (6-2) was playing its fourth game in two days. But, Stetson (3-4) did all it could do to stop the Crimson Tide from scoring. Fortunately for Bama, it did an even better job, limiting the Hatters to one hit. Next stop is the championship game on Sunday at 11:30 a.m. Central.

Easy enough, right? Just roll in, beat an Atlantic Sun team and move on to the Hatter Invitational champaionship. After all, beating Ohio State twice proved that the Tide is on track. Right?

Not so much. As the bromide goes, that's why they play the game.

Through the first four innings, nobody could do anything. The Tide got two hits in the first, took a walk in the second, notched a hit in the third and put two on base in the fourth by a walk and a fielder's choice, but couldn't manage to drive any of them home.

It was even worse for Stetson. Alabama pitcher Lauren Sewell had a perfect game through three innings. The announcer for WVUA-FM said something about it, then made a joke about jinxing Sewell. Don't want to blame him, but right after he said that, she walked Hatter centerfielder Amy Joyce. Perfect game, gone. But, the no-hitter was still in effect -- until the next batter. Shortstop Chelsey Trotto singled down the leftfield line to break up the no-hitter and give Stetson two runners on base with no outs. Never fear, however, as Sewell struck out the next two batters and Trotto was tagged out on a fielder's choice.

Maybe motivated by that scare, the Tide got it going in the top of the fifth, with catcher Olivia Gibson singling on a bunt, and pinch runner Cat Dozier advancing to second on a sacrifice bunt by second baseman Jackey Branham. Designated player Kayla Braud came up with two outs, and drove the ball through the middle of the infield, scoring Dozier for the only, and game-winning, run of the game.

From the way it looks to us, if Stetson beats Rhode Island this evening, which is fairly likely, the Hatters and Ohio State will finish 2-2 in the Invitational (Alabama 4-0, Rhode Island 0-4). But since the Buckeyes won the only meeting between the teams, a 10-4 affair Friday night, it would make sense that the Tide will square off against OSU one last time this weekend.