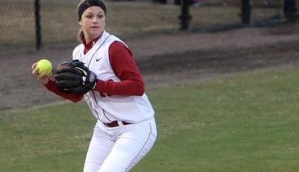 As has been said often on this site, real life rudely intruded on Sunday and Monday, even though I work from home (freelance writing knows no clock-out time), so sorry about the lateness of the recap. Bama seems to really have it going.

Alabama (7-2) went into Sunday's Hatter Invitational championship game against Ohio State (6-4) on quite a run. After losing to Missouri in the opening series of the year, the Crimson Tide hadn't looked back, winning its next five games, including two versus the Buckeyes. The final game gave OSU a chance to hit hit back, but it wasn't to be. Bama was just too tough.

Charlotte Morgan started the game in the circle for the Tide, forcing two ground-outs and striking out one while allowing one hit, making short work of the leadoff hitters. Alabama wasn't so charitable. Second baseman Kayla Braud singled to first, then took second on a wild pitch. Rightfielder Cassie Reilly-Boccia kept in going with a single on her own before stealing second. No doubt, this was looking good to the Bama faithful. With no outs, the Tide had runners on second and third with the three-spot hitter -- Morgan -- standing in the batter's box. Surprisingly, OSU pitcher Lindsay Bodeker intentionally walked Morgan to load the bases.

Shortstop Whitney Larsen took a cut, and reached on a fielder's choice. Braud was tagged out at home, still leaving the bases loaded but with one out. Leftfielder Jazlyn Lunceford came through, though she grounded out. It allowed Reilly-Boccia to score, and left runners on second and third. Next thing you know, first baseman Alex Blewitt walked to first, loading the bases again. The second run of the inning came when third baseman Courtney Conley reached first on an error, and Morgan scored a unearned run. Quickly as you please, Bama was up by two.

The Buckeye second inning was much like the first -- a single, a strikeout and two ground outs. How about two more runs for Alabama? That's exactly what happened. With one out, Braud singled and stole second. Reilly-Boccia walked, and Morgan reached on a fielder's choice that didn't provide an out. So, yet again, the bases were loaded. Larsen was next up, and she claimed first base on an error, which scored Braud. Amazingly, Lunceford grounded out again, but that led to another run, again by Reilly-Boccia.

Two innings down, and Alabama was up 4-0. Considering the first two games against OSU were tight affairs, the cards seemed to be coming down on the right side.

In the third inning, Bama's pitching and general defense got the teeth of Ohio State offense, which finally decided to get it together. Centerfielder Dee Dee Hillman took first on a one-out single, and subsequently stole second base. Catcher Sam Marder then drove in the only score for the Buckeyes in the game, driving home Hillman on a single.It could have gotten worse, but the Tide locked it down, and that one run constituted OSU's only run of the game. With one out, Kelsi Dunne came in to spell Morgan, who moved over to first base. She struck out the next two batters to end the inning,

In the fourth, Braud took first base on a bunt, and moved on to second on an error. A double by Reilly-Boccia to centerfield drove in Braud. Keima Davis came on to pinch run for Braud, and claimed third on a fly-out. She then notched another run for Bama following a bunt by Larsen. Alabama's last run came in the sixth, when Conley hit an RBI single that scored Lisa Elizondo, who came in to pinch run for Blewitt.

From all observations, this invitational was exactly what Alabama needed. Five wins, plus the one-off versus South Alabama, has shown the team and its fans that Crimson Tide softball is ready to roll in 2010. It should be a fun regular season.