Top Moments of the 2009 Season: The Sweet Sixteen - Upchurch vs Ingram

Share All sharing options for: Top Moments of the 2009 Season: The Sweet Sixteen - Upchurch vs Ingram

ed. by Todd - Oops, I hit publish instead of "schedule publish" so this match up is about 11 hours early. Oh well...

Another close one yesterday with Ingram's drive against SC taking out Fitzgerald's SECCG tackle with 57% of the vote. Honestly, I'm still conflicted on that one. I voted for Fitzgerald because, at the time, I still felt that game was in doubt and that our lackluster return coverage was going to bite us again, but when P.J. wrapped Brandon James up and pulled him down like he'd been working with the safeties all week? Man, I just knew there was no way this team was going to let Florida ruin their season again and couldn't help but smile. That being said, after watching Ingram's drive again and seeing him trying to catch his breath and barely able to stand but heading back to the huddle anyway I got inappropriately emotional. I simply can't say or think enough good things about this kid, both on the field and off, and without him we would have been in some serious trouble through the middle of the season. So no arguments on that drive advancing to the Elite Eight (where it gets the "honor" of facing the Anders Forced Fumble, so another tough choice there). Anyway, another couple of physical TDs today; Ingram is back at the selfless heroics with a great second effort TD despite leg cramps and visible pain to effectively seal the National Title, and Roy Upchurch is lowering his shoulder on a hapless Hokie for one of my personal favorite TD runs of the season. Vote away: 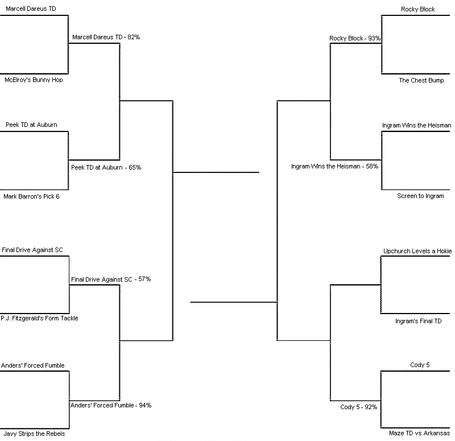